With the Democratic dominance politics in the five boroughs, a decade in the City Council, the support of Brooklyn’s powerful Thomas Jefferson Democratic Club and a huge fundraising advantage, conventional wisdom is that Lew Fidler is the “overwhelming favorite” against David Storobin in the special election to fill convicted former State Senator Carl Kruger’s seat in Brooklyn’s 27th District, but members of the Brooklyn GOP, who describe themselves as the “boots on the ground” in Mr. Storobin’s campaign think their man has a chance to win.

“It’s a horse race, it’s a definite horse race and whoever works the hardest is going to win, and I think we’re going to outwork the democrats,” Gene Berardelli, vice chairman of the Kings County Republican Committee told The Politicker.

Only about a month after it began, the race between Mr. Storobin and Mr. Fidler is quickly shaping up to be one of the city’s most intense political battles with insults and accusations flying back and forth. The Brooklyn GOP believes Mr. Storobin can emerge victorious because of the district’s large Orthodox Jewish and Russian populations.

“The dynamics of the community that the 27th District includes, you have the Orthodox Jews, a large Russian community. You have to think about these things,” Brooklyn Young Republicans Vice President Eugene Pevzner said. “You can’t just write that off.”

Russell Gallo, President of the Brooklyn Young Republicans and a District Leader in Southern Brooklyn, said the impact of the Russian community on this race has been underestimated because Russian immigrants in the area haven’t always registered to vote.

“I do think they’re underrepresented voter enrollment-wise and the Democrats know what’s coming when it comes to this,” Mr. Gallo said. “When they register, to vote and they get politically involved, they’re leaning Republican.”

“There is a hunger there to be politically active and politically motivated, mainly because they come from a culture where they were discouraged from any type of participation,” Mr. Berardelli said. “Now that they’re here, they want to exercise their rights and they’re coming out in droves.”

The Kings County Republicans believe Mr. Storobin’s Russian heritage will help him appeal to that community.

“A lot of the older Russian people, not even necessarily older, but who immigrated here, you know, they see this young successful man, they seem him as their son,” Mr. Pevzner said. “He came to this country, he worked hard, went to school, got an education, became a successful attorney. They see the work ethic and they really think that, if he gets elected, he can take that to Albany.”

They also expect his conservative positions on issues like gay marriage, business regulation and taxes to connect with Russian and orthodox Jewish voters.

“His values are the values of that community,” Mr. Gallo said. “That community is very conservative. Lew Fidler, on the other hand, he has some very liberal positions and, as that area gets to know Lew Fidler, they will be going to David Storobin in droves.”

Mr. Gallo also believes the Russian community has a special connection to the Republican Party.

“The immigrants from the Soviet Union or the former Soviet Union that are coming here, they have a very vivid recollection of Ronald Reagan and what he did, so a lot of them are naturally leaning Republican when they get here from the beginning, before we even have to convince them of anything,” he said.

“There are people on the other side and in the media, frankly as well, that’ll look at a Board of Elections statistic of registered voters in the area with their preconceived notions of what the demographics usually do or have done in the past,” Mr. Berardelli said. They draw conclusions that are not accurate, 66 percent of Bob Turner’s win came from the Brooklyn piece of the district where Storobin’s running now.”

“If you look at certain statistics, you could make the argument, I believe, that David could even be favored in this race,” Mr. Gallo said. “There’s no way you could look at Bob Turners results in the very same area, who was an Irish Catholic, and not say David Storobin doesn’t have a chance in this area.”

Whatever happens, one thing that’s certain is that the Brooklyn GOP will continue aggressively working on Mr. Storobin’s behalf.

“We’re going to be the guys knocking on everybody’s door annoying everybody, and handing out literature, and delivering signs, and filling the calling banks,” Mr. Berardelli said. 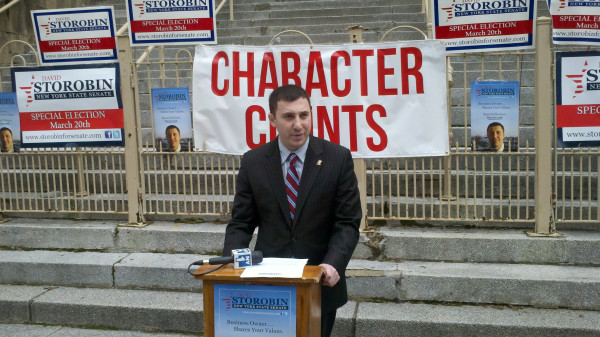