Signal hacking, which probably reached its Zenith with the infamous and surreal “Max Headroom” hack of a Chicago TV broadcast in 1987, may be making a bit of a comeback with the advent of WiFi enabled Smart TVs. That’s one possibility suggested by the WiFi hack of a South Carolina Best Buy that displayed “extremely, extremely pornographic” images on several 55-inch TVs in the store’s display.

Gloria Berg, who was in the store with her children at the time, complained to the manager. In an interview with a local TV station, Mrs. Berg told of the the manager’s interesting response to her concerns:

She says the manager told her someone had used the store’s WI-FI to upload the image to the TV’s.

She says the manager told her the same thing had happened the night before and there was nothing the store could do about it.

“They, like, brush it off like it’s…who cares? Nobody cares. It’s pornography. And we are getting adjusted to that kind of mentality. That’s why we are losing our morals,” Berg says.

The news station couldn’t get a response from the local Best Buy but the corporate office issued a statement, stating that “two individuals” had hacked into the store’s wireless signal “to broadcast inappropriate content on a smart television display.”

Best Buy apologized for the incident(s) and said it would work to “ensure that it does not happen again.”

Techdirt recently wondered if Smart TVs were “not such a smart idea,” noting that “the Smart TV is just a sales vehicle dreamt up and promoted by the TV OEMs. They had a bang-up decade updating everyone to flat panels, then pushing the upgrade to 1080P. They’ve had less success with 3D, and are looking for the hook to make another upgrade worthwhile.”

That’s practical, but in an age when the amorphous hacktivist collective Anonymous appears to worry even the N.S.A., the way Smart TVs are displayed inside big box retailers like Best Buy (or Wal-Mart) may present yet another opportunity for hackers to wreak havoc on the sensibilities of customers like Mrs. Berg or even launch an Anon-style protest to prove a point.

Or, like the “Max Headroom” hacker 25 years ago, just show unsuspecting shoppers video of themselves getting spanked with flyswatters. 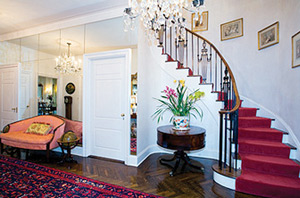