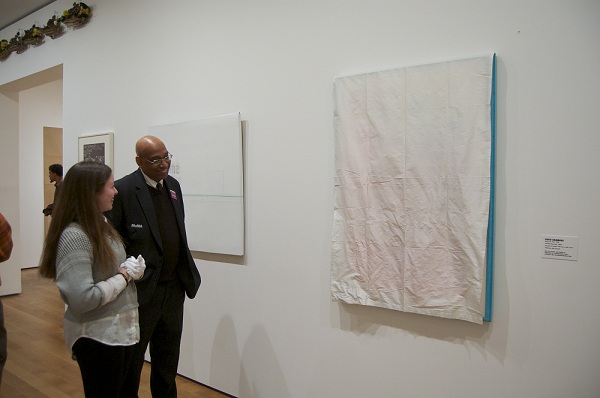 After the unveiling: David Hammons's 'Untitled (Kool-Aid)' (2003) in "Printin'" at MoMA. (Photo by Andrew Russeth)

Though it is hanging on a wall in a gallery at the Museum of Modern Art right now, one work is strictly off limits for all but a few minutes each week. It’s obscured with a white silk cloth, through which a faint pink glow emanates, and it has an electric-blue terry cloth frame. A wall label advises that the work may be viewed only by appointment, at the request of the artist. An email address is listed.

That artist is David Hammons, who’s known for shunning public exposure and stylistic consistency. He’s painted Jesse Jackson as a Caucasian, sold snowballs and had a show that consisted of a pitch-dark gallery. For MoMA’s 2003 piece, he used Kool-Aid to make “an absolutely delicious abstraction with a little stamp of the Kool-Aid man,” according to MoMA curator Sarah Suzuki, who compared it to Buddhist sutras and ancient texts that are sometimes covered for spiritual or conservation reasons.

Gallerist had yet to see the work when we spoke with Ms. Suzuki, who, along with artist Ellen Gallagher, organized “Printin,’” the show that includes it. But we had made—or rather accepted—our appointment: Friday at 3 p.m. (No other options available.) “You kind of just want to lick the thing, it’s so beautiful,” the curator told us, tantalizingly.

On Friday afternoon, we met curatorial intern Lotte Johnson at a back entrance—return viewers need not wait in line or pay. Ten people made inquiries, she said, and so we waited for stragglers, but none came. In the gallery, she put on white gloves (as Mr. Hammons requires), lifted the silk, and there it was: gorgeous waves of pink blown across the paper, the mascot hovering in a corner.

“We’re such a culture now of immediate gratification,” Ms. Suzuki had said. “What [Mr. Hammons] does is to counter that and deny it. If you want to see this, you need to make a little bit of effort. It’s not an arbitrary thing.” But it is worth it.