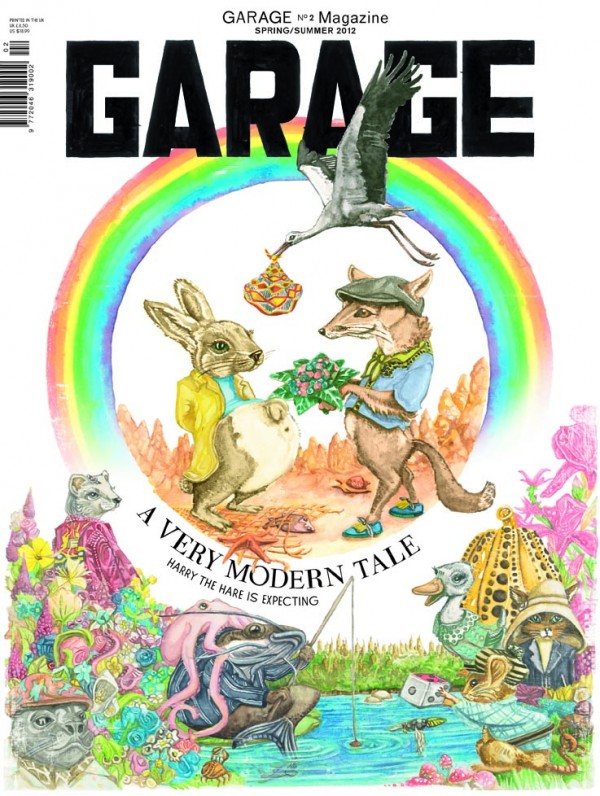 It was looking like an ordinary, ho-hum afternoon in the Gallerist office today, until we received an e-mail with some extraordinary news. The Greatest Magazine in the History of Mankind, Garage, just released a JPEG of the cover of its second issue, which we have posted above. It’s a little bit lower key than last issue’s Hirst vagina tattoo cover, right?

Sure, it looks tame, kitschy, even infantile. But look at it again—really look—after reading this beautiful quotation from Garage founder Dasha Zhukova, which was included in the release: “We need new nursery rhymes for new beds / where we will dream new dreams.”

Yes, we need new dreams with nursery rhyme characters sporting designer clothing. And Garage delivers: Sigmund the Seal is wearing a hat by Prada and a jacket and shirt by Marc Jacobs. Frederick the Wolf’s outfit is by Prada, his bouquet Missoni. Carisa the Cat has a Balenciaga hat and Prada jacket. (Lots of Prada in this children’s tale!) You get the idea.

The scene, we’re told, is inspired by Yayoi Kusama’s 1968 Homosexual Wedding performance, and was picked to grace the cover because this issue of TGMITHOM is about sex and relationships. The news release muses on that:

“The internet brings new chances for finding a sex mate—or a soul mate. There’s a site for everyone: GreenSingles, Spiritual Singles, OK Cupid, Nerve, JDate. Meeting people face to face is rarer than meeting them online.”

On which website, one wonders, did Ms. Zhukova meet her billionaire oligarch partner Roman Abramovich, who vigorously collects art and has reportedly admitted to paying billions of dollars in bribes in exchange for control over natural resources in Russia?

In any sense, the issue also apparently includes articles about the Occupy Wall Street movement, the Middle East, the Internet (“the biggest game-changer of all”) and an interview with Michelle Rhee, the former D.C. schools chancellor whose aggressive—some have said “anti-union”—reform program proved rather controversial during her short tenure. Garage knows no bounds.