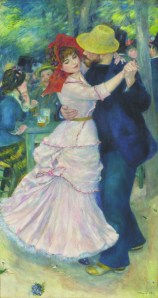 Just as Fashion Week swept over New York, with lithe girls in tomorrow’s ensembles dropped on nearly every downtown block, an exhibition uniting for the first time nine large-scale figure paintings by Pierre-Auguste Renoir made its debut at the Frick Collection. The show highlights not only Renoir’s interest in the full-length, nearly life-size format, but is also a neat grouping of his depictions of the modern young woman of his time. Made between 1874 and 1885, these images capture her habits and costumes, from patent leather shoe to pleated cap, as well as the vision Renoir had of women and their role in the modern world.

Renoir’s interest in fashion had roots in his family. His father was a tailor, his mother and mother-in-law both seamstresses; his wife, Aline, was a dressmaker before they married. He rendered the fabric and cut of women’s clothing with a precision that unfolds an age before us with novelistic detail. He began his artistic career early, as a prodigy at hand-painting porcelain pottery, becoming so adept at it that, before he was 15 years old, he used the money he had earned to help buy his parents a home. When machines replaced men in that field, he first tried to paint faster and, when that failed, turned to painting cafe-mural Venuses, and finally to fine art. He first hung a painting in one of the Salon exhibitions of the time in 1863, when he was 22.

The first painting on display at the Frick, La Parisienne (1874), shows a woman overshadowed by her stylish blue dress. You can make out each button and pleat of her costume and bustle. If Manet just a decade before had painted radically nude modern tarts, this is a more traditionally feminine figure. The model is the frank-faced Marie-Henriette Grossin, an actress, but Renoir’s cottony brush strokes render her, like all the women he would paint, rosy-cheeked, flushed and idealized. No intellectual or bohemian, her modish and bourgeois gown wears her more than she wears it. Like all the paintings in the show, the work is made of a limited palette—mostly cobalt blue and white, with touches of yellow, pink and ocher.

Renoir showed La Parisienne in the first Impressionist exhibition, in 1874, along with The Dancer (1874). The uncomplicated prettiness of the latter painting’s young ballerina carries the picture, despite the green shadows on her legs and the blue paint defining her shoulder. There is a still-wet shimmer to the brushwork where it depicts the heel and toe of her satin ballet shoes. She stands at attention in fifth position, with her flat chest and made-up face raised for admiration, nothing like the sordid young dancers Degas would call “stage rats.”

The next painting, La Promenade (1875-76), belongs to the Frick. It’s a winter scene of a young nanny with two girls in her charge. One child clutches a doll, the toy’s masklike, made-up face an echo of the female figures surrounding it. Every material is legible, from starched collar to lace-trimmed cuffs. Their ensembles are edged with fox and white mink, while the blur of background figures and dogs gives the modern scene a virtuosic feel.

Acrobats at the Cirque Fernando (1879) shows two circus performers, Francisca and Angelina Wartenberg, collecting oranges thrown as tribute to their act. They are just children, but their postures have the unchildlike, professional poise of pageant contestants. Gold lace-up flat boots and fringe render their costumes comical, but the sculptural curve of their bodies is just right—the muscular poses of stocky girls on sturdy calves.

The early painting The Page (1875-6) seems a misstep. The actress Grossin is dressed as a boy for the stage, her outfit a shimmer of white set in a sketchy theatrical space. If Renoir is at his best showing timeless, almost sculptural figures set in a specifically modern world, here the portrait of his own era done through a figure in the costume of another ends up illuminating little.

Renoir’s best work here is a trio of paintings representing couples dancing. The first of these, Dance at Bougival (1883), is set outside Paris at a Sunday country dance. The painting has a breathless liveliness that The Page lacks. Over beers and under chestnut trees, top hats mingle with straw hats. One woman tips forward precariously in her chair. In the foreground a young couple dances. The couple is poor, but the painting is luminous. Costumes reveal enough (patent leather on the dirt dance floor, ungloved hands just touching) to tell us the man and woman’s class and aspirations, but their bodies say just as much, and there is a comfortable balance between fashion and physicality rare for Renoir.

Dance in the Country (1883) has as its models Renoir’s friend Paul Lhote and Renoir’s future wife, Aline Charigot. Charigot, a big, round teenager, and Lhote, in a woolen, slightly mismatched suit, are another vital dancing pair. She holds a gaudy Japanese fan as they dance on a terrace; the scene is so precise we can imagine what each has had to drink and eat. Renoir gets the radiance of a woman in love, a blur of friendly faces seen through motion, and the unencumbered happiness of the dancing pairs.

Dance in the City (1883) shows a third couple, this time at a ball, waltzing on a marble floor, and surrounded by exotic potted plants. Pinks and blues play in the shadows of her white dress, and there is the palpable sense of a hidden orchestra playing music. It’s a scene worthy of a Henry James novel. Renoir’s gift is to render how fabric is cut, how male and female hands touch through white silk gloves, the way a woman looks shyly to the side as she is being admired. These paintings are fascinating for their restraint—how little they critique, and how much they say.

The last of the paintings, The Umbrellas (1881-85), is also the most unusual. Instead of focusing, as the others do, on one or two main female figures, this is a crowd scene. And where the others are light, this one is dark, with blue umbrellas creating a Caillebotte-like urban claustrophobia. But most of all, this painting is odd because it was completed in two stages. The right side, painted in 1881, shows women in the ornate street fashion of that moment; on the left side, painted four years later, women wear tight, tailored dresses with less fuss, made in the so-called English Style. The women are not only of different classes and ages, but they are also of different eras, and the piece speaks to Renoir’s ability, albeit inadvertent, to capture the fact that a mere four years yielded so noticeable a change in fashions.