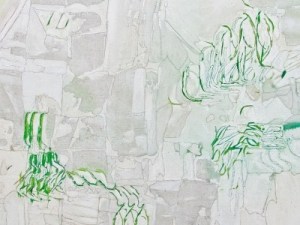 In “Applied Flesh,” his first New York solo show, Nicholas Buffon uses five paintings and two incredible drawings to get a view of what it means to live in time—in the paintings, by recording the full weight of the momentary action of making a mark; and in the drawings, by diagramming the full scope of the patterns created by singular actions when they’re repeated.

In Ooey Gooey, That Icky Sticky, Gummy Stuff and Space Nugz IV, space is something that must be simultaneously built up and covered over. Using varying shades of white, along with pale blues and pinks, Mr. Buffon divides his canvas, like a child with a coloring book, into roughly rectangular blocks that can be dealt with piece by piece. (Also like a child’s coloring book, the paintings are marked by whatever occasional snot, blood, dirt or footprints might happen to happen to them when they’re unstretched.) In place of a coloring book’s preprinted lines, but with the same effect of pre-empting conscious decision making and pinning the process of composition directly to the material surface, Mr. Buffon uses the natural irregularities of cheap canvas. The paintings becomes transparent records of their own making.

In between the whitish blocks are repeated, linear forms in various shades of green. On Ooey Gooey, they seem to move in slow motion, like the visual trails left by a too-bright light; on Space Nugz IV, they’re delicate and pale, like new spring leaves. A small, untitled canvas by the artist’s father shows a face mostly painted over in white, with only a red-lipped mouth and single large eye still visible.

If the paintings try to picture time by isolating its process, the drawings work by mapping its effect: like medieval comic strips, they imagine themselves in God’s place and see everything at once. Made to design, diagram and document Mr. Buffon’s performance pieces, as well as to be pieces in their own right, Time Curtain and Time Drain show multiple iterations of the artist, with yellow hair, blue jeans and white socks, as he poses, dances, marches, vamps, does somersaults, whacks himself on the forehead in surprise, pretends his hands are eyeglasses and crawls under another Buffon’s legs. Drawn in ordinary black pen and colored pencil with a casually decisive, cartoonish line, their tone is funny without being jokey and honest without being overwrought. The obsessive filling of space is pushed to the back: in Time Drain, in the form of a monochromatic field of black, but in Time Curtain, in the form of black and green horizontal ruled lines that begin to skip as they get higher on the page. The artist’s nib got dirty. The reality of happenstance—the fact that however it happens to happen is how it will be—is given its due but not asked to bear any symbolic weight. If it were meant to mean anything more than it does, it would no longer be happenstance.

But is he actually whacking himself in disbelief, there in the bottom right-hand corner of Time Curtain, or is the sequence an illusion? Mr. Buffon draws himself kneeling on one knee, with four faces mutating through four grotesque expressions and six overlapping right arms in alternating shades of healthy pink and jaundiced yellow. It’s a convention of indicating motion as old as figurative art, and we read it as automatically as we read a black circle in a white circle as an eye, or a pointy blob of yellow as hair, or a sunrise followed by a sunset as a day, or a sequence of logically associated thoughts as a mind, or a line of marks that wander across two dimensions as a painting. But his hand could be moving the other way, down from the forehead, or even not at all. If we could see them all at once, we would appreciate that each moment was its own moment—each part its own part, each mark its own separate mark—and a multitude of new relationships among them would become clear. The separation would have the paradoxical effect of reinforcing the unity of the whole.

In the center of Time Curtain, like a wrong-headed but desperately difficult-to-dislodge habit of counting days and taking things for granted, or like the shaped relics of image and word that we use to travel from moment to moment, is a little brick wall. Half a dozen little Buffons are trying to get past it—they peer over, they lean to the side, they stick their tongues out like Snoopy when he’s exhausted. But one of them—is it the one who began the drawing, the one who dated it at the end, or the one who drew this very section?—finds a round hole drilled through the middle of the bricks, and he puts his eye to it. We can’t see his face—we can only see the eye, because he’s on the wall’s far side, looking at us. A black exclamation point hangs over his head.

Recording the action of making a mark with rigorous silence and simplicity, on the other hand, are the series of “frottages” that Gerald Ferguson, who died in 2009, made in the last decade of his life. Arriving at his technique by way of text paintings, and stencils of letters and punctuation marks, Ferguson draped canvas over such sturdy, functional objects as trash can lids and steel drain grates, and rolled over them with black enamel paint. The dense black says “sign,” or “stasis,” but the off-white backgrounds say “work,” or “process,” and if you look at 19 Drain Covers and think “chicken coop,” “prison” or “Tower of Babel,” or at the deep, multiple overlapping lines of 1 Km Rod and think of a primeval Jungian forest—or even at the concentric circles of 9 Ash Cans and think of Jasper Johns—you feel immediately rebuked, because the marks on Ferguson’s canvases refuse to be anything but what they are. The rest is in your head.