Last Friday, Gay City News reporter Andy Humm printed a column accusing Councilwoman and likely candidate for Public Advocate Tish James of defending “KKK access to schools.” The story was based on a testy exchange about the controversy over whether churches should be allowed to hold worship services in public schools when class is not in session that took place between Ms. James and Ms. Humm after a public forum on stop-and-frisk at the LGBT Community Center where both were speaking. Ms. James, who supports allowing religious organizations access to school buildings, gave her side of the story to The Politicker and clarified her position on the controversial issue.

“The comment was made in jest, and apparently, it was taken very seriously by a reporter who obviously was very disappointed in my position regarding allowing access to organizations of faith, who have used and want to continue to use public schools on days that schools are closed,” Ms. James said.

Mr. Humm’s story, which was subsequently picked up by other media outlets, quoted Ms. James as saying the Klan is “entitled to equal access.” Ms. James, who said she knows Mr. Humm, described her interaction with Mr. Humm as a conversation that devolved into a “shouting match” and said she made the remark in an attempt to end the argument:

“I respect him but, as I indicated to him then, and as I will state now, we agree to disagree and it should have been left at that. To continue to raise pointed questions and issues and distinctions in this particular area just raised the level of conversation to an argument and to a point where it was just a shouting match. Unfortunately, whenever it rises to the level of a shouting match nothing constructive could ever come out of it, and so what I attempted to do was really try to limit the conversation by just giving him, I guess, an answer that he wanted, but it was said in jest, most of the individuals who were around us at the time did not take my comment seriously. He indicated he was going to print it, I didn’t take him really seriously. I was tired at that point in time and I really just wanted to end the conversation. I wanted to end it on the point that we agree to disagree.”

In his column, Mr. Humm described his conversation with Ms. James as a “heated debate.” We witnessed the argument between the two, which lasted for over 20 minutes and included Mr. Humm blocking Ms. James from leaving the area and pushing his finger into her chest as she repeatedly said, “Let’s agree to disagree.”

On February 12, Mayor Michael Bloomberg put a ban into effect barring churches from renting school buildings to hold services on Sundays, when the buildings are otherwise closed. Four days later, U.S. District Judge Loretta Preska issued a restraining order blocking the ban, but on February 21, a three-judge panel at the 2nd U.S. Circuit Court of Appeals narrowed Judge Preska’s order to only include a single church, the Bronx Household of Faith, which has been fighting a legal battle to have access to school buildings on Sundays for more than fifteen years.

Ms. James described the issue as a “delicate balance” and said she doesn’t support giving all organizations access to public school buildings.

Ms. James said this could be solved through the creation of “a review board or perhaps some strict language.”

Critics of allowing religious organizations to rent space in school buildings argue many religions are anti-gay.

“Some great gay organizations are going to argue that some churches preach hate in their sermons and are not friendly to the LGBT community,” Ms. James said. “My point is and my position has always been an issue of access and providing some criteria so that organizations who are of a certain ilk would not be in a position to have access to our schools.”

Ms. James also pointed out that religious groups are currently allowed access to school buildings for uses other than worship.

“It’s important for people to understand that houses of worship be, they Christian, Jewish or Muslim can use our schools currently, it’s the question of prayer,” Ms. James said. “They can use it to teach, they can use it to sing songs, they can use it to educate, but it’s the prayer aspect of it. … Some people want a complete ban and that’s what I oppose, because for me it’s an issue of access, allowing organizations to use it that do not preach hate and do not appeal to the prurient interest.”

Ms. James said she believes lawmakers in Albany are trying to work on a compromise to settle the issue.

“I think, and I’m not sure, at this time that the Speaker of the Assembly is trying to strike a compromise,” Ms. James said. “I do know that there is a liberal wing within the Assembly amongst the Democrats who are opposing this, who have taken a very strong position. Som I’m going to defer to the Assembly on this particular issue.” 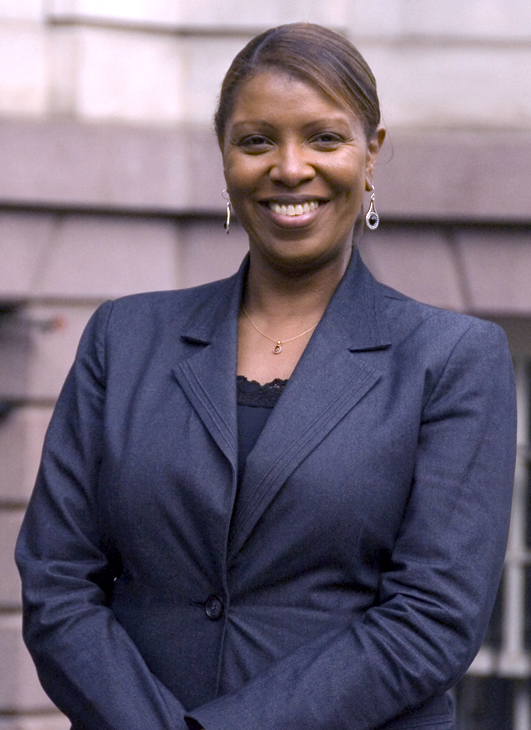