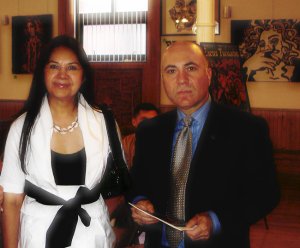 Glafira Rosales with her lawyer. (Courtesy the New York Times)

The Times has the best, most detailed article yet written about the alleged forged paintings that a little known Long Island art dealer, Glafira Rosales, was selling through Knoedler & Company, the 165-year-old Upper East Side gallery that closed abruptly last December. In the piece, we learn just how messy this whole situation is.

First of all, many of the Motherwells, Pollocks and Rothkos that are now accused of being forgeries were so convincing that confirmation of their authenticity came from a number of parties, including no less an authority on Abstract Expressionism than the artist Frank Stella. He was brought into the gallery in 2006 to inspect a group of paintings brought in by Ms. Rosales:

“After inspecting several Rosales paintings Mr. Stella said, ‘Each one is too good to be true, but seeing them in context, as a group, makes one realize they are true.'”

And the Dedalus Foundation, a nonprofit started by Robert Motherwell to protect his legacy and that of his contemporaries, which had initially endorsed a group of Motherwell’s “Elegies” that Ms. Rosales had brought to Knoedler, was in fact quite divided when they reneged on that opinion several weeks later: Motherwell’s own personal assistant, Joan Banach, believed, according to court papers, “’It is more likely than not…that a Rosales Motherwell she inspected at Knoedler ‘is a genuine work.’”

But in 2009, after Ms. Banach’s exit from the Dedalus (she claims she was fired), the foundation declared Ms. Rosales “the point person for introducing a cache of seven fraudulent ‘Spanish Elegies’ to the market.” Regarding this change in opinion, Ms. Rosales’s lawyer told The Times, “The art world is a world of illusion.”