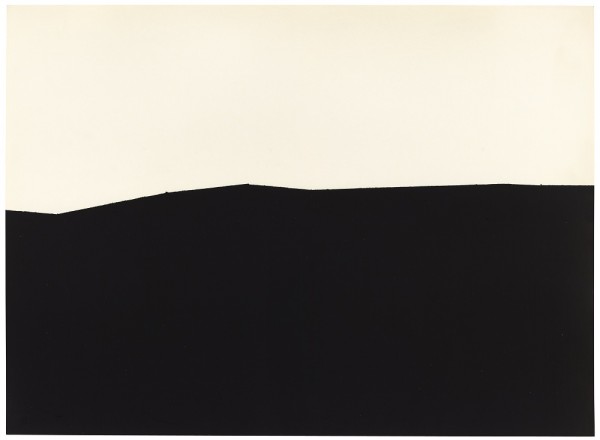 The late Anne Truitt, whose work is often associated with Minimalism, is best known for her freestanding, assertively self-effacing, brightly painted wooden pillars. Confronting and repossessing the history of sculpture and the nature of artistic ambition at a 90-degree angle, formally simple but psychologically complex to the point of opacity, they’re documents of a kind of transcendental sublimation. But the same quality illuminates the best of the several dozen drawings—pale graphite grids, saturated color fields, minimally figurative angles and lines—currently on view at Matthew Marks Gallery.

28 Dec ’62, named, like several other of these works on paper, for the date of its execution, is just under two by three feet but dominates a large room. A clean-edged black shape, painted in acrylic with impossible-to-discern brushstrokes, fills a sheet of white Bristol paper. It’s not quite a rectangle because its upper edge stoops down at an angle. From a certain distance, your view of the sheer, dropping emptiness may be disrupted by reflections in the glass protecting the piece, but if you step closer, you can make out pale indigo shadows flickering across the surface of the paint. What is the mark and what is the ground seem clear enough, and so does the way the expansive shape puts emphasis on the negative space; but no sooner does the white border leap out than it seems to push forward the black again. Foreground and background—and with them, free will and inherited language; surface and depth; expressing and obscuring; and making and erasing—switch places again and again until they become an infinite recursion. There’s hardly space for the viewer to enter, but the movement is hard to look away from. The effect is something like sci-fi novelist Philip K. Dick’s “Zebra,” the massive intelligence that he hypothesized could camouflage itself by looking not just like something else, but like the whole environment.

Shear No. 5 and Shear No. 16, on the other hand, both made in 1976, bring to mind an older book: Like the imperial court ladies of The Tale of Genji, who expressed their esthetic elliptically, by trailing overlapping silk sleeves in different colors from the windows of their palanquins, these drawings work by means of static juxtaposition. In Shear No. 5, the near-rectangle is a deep Japanese plum color and has an asymmetrical peaked roof. The background is royal blue. The shape is painted thickly enough to be discernibly raised from its ground, but despite its density is translucent enough to let through long, narrow lines of blue and to reveal its own grainy, vertical brushstrokes. It’s impossible, again, to see into the depths, but in this case not because they’re hidden, but because all the artist’s energy has been poured into the surface.

9 Jan ’63 shows two long, horizontal rectangles, outlined precisely in ink over graphite, joined by six irregularly spaced vertical lines. Floating between drawing and diagram, it’s gentle but withholding. Several other grids and houselike shapes of distinctly but faintly drawn graphite lines, sometimes filled in with light applications of white acrylic, test the boundary between declaration and hypothesis by being literally difficult to see: from the other side of the room, they look like blank pieces of paper. The long, narrow, pointy black shape of Sable XIV, on the other hand, like a low rise just over the horizon, has such a minimal figurative efficiency that it seems to pull the room in, like a vacuum, rather than giving its image out.

Other Minimalist work chooses easily generalized and abstracted colors and psychologically potent forms to suggest the purity of disembodiment: It uses its materials to transcend the material. But even Truitt’s blacks, blues and reds clearly remain paint. And most of the drawings in this show don’t use such loaded, argumentative colors at all. Instead, their streaks, dashes, spatters and stripes are rendered in and on bright floral yellow, pale peach, powder blue, orange and green, or light plum. The self-effacement of formal Minimalism becomes a gesture of respect to the concrete particularity of any given work. One untitled drawing from 1967 could be the flag of some quiet island kingdom where the prime minister writes poetry and the standing army consists of a single policeman. Two wide vertical stripes in the middle, one a thick orange-yellow, the other dense pink, are bounded on the sides by slightly different shades of peach. It’s completely self-possessed, but looking too closely feels something like interrupting.

The whole point of a “happening,” you’d think, is that you had to be there, but the comprehensive new documentary show at Pace, “Happenings: New York, 1958-1963,” which includes numerous photographs and informative, endearingly enthusiastic wall labels, as well as videos, recreations of sets, and a pile of fake Danishes and pair of giant shoes made by Claes Oldenburg, gets the flavor across. The offset, unbalancing overlap of different forms of documentation works particularly well for Red Grooms, who put on his first one-man show, “A Play Called Fire,” in Provincetown in 1958. In that performance, he painted Painting From “A Play Called Fire”; in 1970, he made a diorama commemorating another performance, The Burning Building (1959) Remembered; and in 1984 he recreated The Burning Building for a video, which, transferred to DVD and playing on a small screen set in the wall beside the diorama and facing the painting, has the artist in white jeans and white face makeup showily giving a hotfoot to a broom-wielding, wordless fireman in a red union suit.