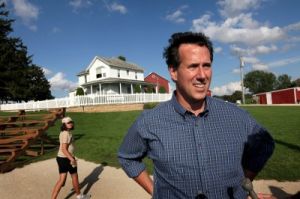 DYERSVILLE, IA – AUGUST 09: Rick Santorum, former U.S. Senator from Pennsylvania and Republican presidential hopeful, makes a campaign stop at the farm where the 1989 Movie “Field of Dreams” was filmed on August 9, 2011 in Dyersville, Iowa. Most of the Republican presidential candidates are crisscrossing Iowa this week hoping to gain support in front of the Republican Party debate and Iowa Straw Poll. (Photo by Scott Olson/Getty Images)