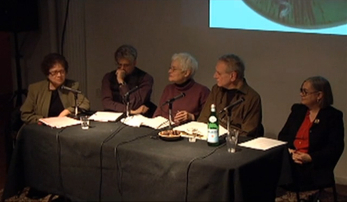 “What if art is the natural condition of [man], and everything else has gotten in its way?” asked multimedia artist and poet George Quasha near the close of a panel discussion on Tuesday night at SoHo nonprofit Location One. He was joking, but the laughter in the modestly sized audience seemed to be a collective acknowledgement of an “ah-ha” moment.

In a darkened gallery in the space, a spotlit panel of four sharp and humbly-attired performance art luminaries–George Quasha, Alison Knowles, Gregory Whitehead, and Lenora Champagne–read essays on the amorphous subject of “belief” from the most recent issue of PAJ: A Journal of Performance and Art. The panel was moderated by co-founder and editor of PAJ Bonnie Marranca.

Each of the panelists first read his or her essay with almost uniformly monastic calm. One of the founding members of Fluxus, the soft-spoken, white-haired Alison Knowles, reflected on a lifetime of shocking audiences with everyday experience:

“I think [the actions of the everyday] is where belief exists for every one… whether it’s going to work or baking bread, the belief is there that we’re doing something toward our whole life. My belief is that every person who gets up and goes into their day and does their work is coming from some unrecognized belief system that maybe they’ve picked up as a five-year-old, or they don’t look at it anymore. But to address that and work with it is powerful.”

The rest of the panelist concurred with that assessment. Mr. Quasha, who looks something like a fatherly version of Sterling Ruby, mentioned that “self-generating experience has its own intelligence.” Ms. Champagne, a discreet-looking performance artist and writer–with a salt-and-pepper bob, round glasses and a black velvet blazer–said quietly that she believes in the power of art to help people cope with and shape their reality. Gregory Whitehead, a radio playwright and documentary essayist in a checkered vest, said eh believes in the community that radio creates.

On their specifics of their beliefs, though, the artist-writers ventured into remarkably different territories, prompting a female audience member to note that “artists are reluctant to show a commitment to a certain set of values in an artwork.” She wondered aloud, “What’s the other side of that?”

Mr. Whitehead replied that artists and the art community pays a price for those varied beliefs. “Marginalized, censored… profoundly disrespected… all of this is there, awaiting you if you dare extend outside the prevailing norms,” he argued. “I absolutely, one hundred percent affirm that this will and does happen… but this is what we have to do.”  This aroused a warm, and deep, collective nod; it was clear that he was preaching to the choir.

And the margins can sometimes become the center, added Ms. Marranca, who has spent nearly four decades working in performance art, which was until recently a rather obscure field. “I have lived to see many of the [performers and composers] who were marginalized [booed offstage, and laughed at by critics] become the mainstay of what we now know is performance history. So that’s the kind of revenge I see.”

Ms. Champagne argued that today “you have people not participating, not voting, not expressing anger…[without blind belief] it’s harder to think that one person can make a difference.”

This sentiment–that religious radicals have permanently hijacked the public stage, making firm political beliefs and commitment hopeless–sounded a bit like typical Bush-era dispair. But there was also some optimism on hand. Mr. Quasha chimed, “I think the Occupy Movement has learned incredibly from the kind of art that [Ms. Marranca] has represented all this time. What’s great about Occupy Museums”–the group that has been staging demonstrations at area museums–“is that you can’t figure out what they believe in.”  He thumped his fist on the table. “That’s real anarchy!” This may have summed up the tone of the night: a total conviction in, even a celebration of, uncertainty.

Click here to watch the full video of the Jan 24 panel.