Is Westboro Baptist losing its edge? Raw Story reports that while the infamous anti-homosexual protest organization (or, as Westboro likes to call itself, “church”) did not actually attend singer Whitney Houston’s Newark, New Jersey funeral on Saturday, Westboro minister Margie J. Phelps did post an apparently fake photo of church members gathered near the event:

Did my friends @BET see these lovelies? Such fun singing to @OccupyWallStThis picket is rocking the house! @NJ_News twitter.com/MargieJPhelps/…

The image was presumed fake in part because the New Jersey Star-Ledger published a report indicating protesters weren’t permitted in the area:

Star-Ledger reporters on the scene said access to that area had been restricted all day, and confirmed no active protests were occurring in the place depicted in the photograph.

Westboro may have stayed home Saturday, but a handful of Occupy Newark protesters showed with a sign reading, “Occupy prays for another soul our community could not save.”

As Raw Story noted, Westboro has recently been more bark than, well, bark-bark. Church leader Fred Phelps  called the Broward-Palm Beach New Times in July, 2011, to say his church would protest the funeral of U.S. Army Spc. Jordan Christopher Schumann, but Westboro was ultimately a no-show. In January the group allegedly planned to protest a law enforcement officer’s funeral in Ogden, Utah, but again, no Westboro-patented “God Hates Fags” signs were in evidence. 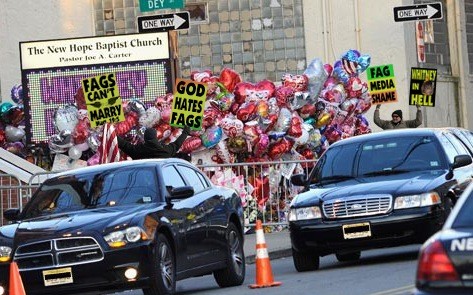