We always think of the British as being this stuffy, propriety-obsessed society. Mostly we think that because we’ve been watching a lot of Downton Abbey, which is a documentary about current English culture.

But there’s one place where those Brits can certainly show us up, and that’s in their comfort with nudity during fashion shows. While the only time you’ll see a naked lady at Lincoln Center is if she’s running around as part of a stunt to promote her one-woman UCB show, the debut of milliner Robyn Coles’ collection in London featured not just a nude ladies, but a nude, pregnant lady. A nude, pregnant, famous lady!

Sophia Cahill, better known as Miss Whales 1999, has a history of inadvertently flashing people at Fashion Week. But yesterday she strutted her six-month pregnant stuff in the buff down the runway on purpose, which is very brave as well as a very loose interpretation of the world “fashion.” (Though she did sport three jaunty hats!)

Ms. Coles admitted to The Daily Mail that she had naked models and included her Ms. Cahill in the show mainly for the free PR:

‘As an unknown designer you have to find ways of getting people to your show. I wanted to use different models and different sizes. I’m a big believer in that. With accessories like hats it doesn’t mater what size or shape you are.’

Meanwhile, Ms. Cahill saw her role as more of a personal victory:

“Women can do anything they want…They should be proud of their bodies and a woman in a heavily-pregnant state is the most feminine state, it’s so beautiful, why should it be hidden away and covered up?” 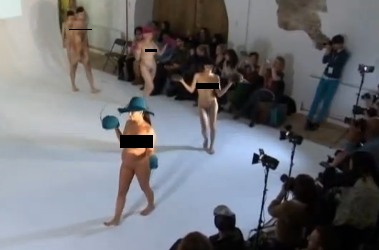