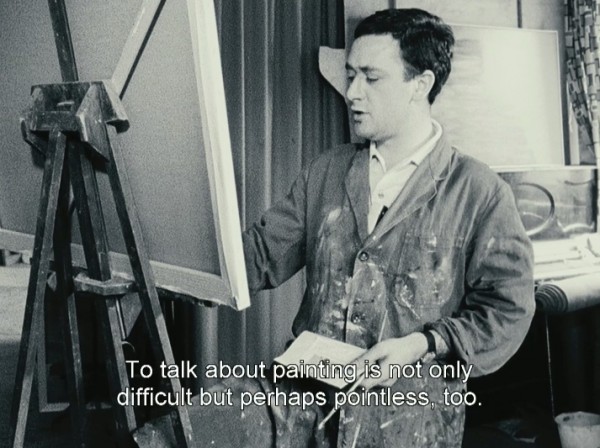 The German painter Gerhard Richter turned 80 on Feb. 9, and celebrated it in high style the next day, by attending the opening of a career-spanning retrospective at Berlin’s Neue Nationalgalerie. The event was filled with paparazzi, according to The Times. (He’s a king over there!) But there’s more new Richter developments to get excited about.

1. A New Film Trailer
Corinna Belz’s documentary, Gerhard Richter Painting, which follows Mr. Richter in his studio as he works on his iconic abstract paintings, just debuted a new preview, and it is stunning. There’s even some vintage footage of the painter at work decades ago, telling the camera (in German), “To talk about painting is not only difficult but perhaps pointless, too.” The film hits New York’s Film Forum in March.

2. A New Artforum Article
Despite that comment from the young man, brave art historians have been determined to figure out his work for decades, and one of his longest-running chroniclers, Benjamin Buchloh, has a 20-part look at his recent work in this month’s Artforum. It’s a rather vigorous read, but worth it since the Harvard art historian has some interesting things to say about the weird new digital pieces Richter has been making, in which “color as spiritual substance appears now in abusive excess.”

Professor Buchloh has seen Ms. Belz’s film, and notes that “the artist accedes to a radical diminishment of tactile control and manual dexterity, suggesting that the erasure of painterly detail is as essential to the work’s production as the inscription of procedural traces… we might be witnessing a chasm of negation and destruction as much as the emergence of enchanting coloristic and structural vistas.” (Also, in case you worried, like T. J. Clark, that the abstractions risk becoming “corporate decor,” Professor Buchloh can comfort you. But you have to read the piece.)

3. Market Triumphs in London
Of course, one reason why Richters aren’t going to become popular corporate decor is because they have become so enormously expensive that shareholders would likely toss out any executive shelling out the cash for one. A large 1987 abstraction made $20.8 million at Sotheby’s back in November, and the artist’s work is cruising along rather nicely in London this week. The majority of Richters on offer at Christie’s and Sotheby’s evening sales sold for above their high estimates, and a large 1994 example made $15.5 million.

4. “The Next Great Market Force”
Citi Art Advisory’s Jonathan Binstock thinks that Mr. Richter “has recently emerged powerfully as the next great market force among the tradition of 20th century painters including Pablo Picasso, William de Kooning and Andy Warhol.” (Quite the boys club there!) But Art Market Monitor’s Marion Maneker links to a recent article by Barron’s Richard C. Morais in which he speculates that an art bubble is on, with “too much money chasing too little investment grade art is inflating the values of previous outliers.” Going to savor that phrase, “investment grade art,” for a long time.

5. Destroying Paintings
As my colleague Michael H. Miller noted recently, Mr. Richter has been making news of late by discussing that he destroyed some of his early paintings with a box cutter or by lighting them on fire. Except, it turns out that some of them have survived, in a sense, as photographs, and writer Greg Allen has been looking at them closely, wondering about repainting them from those photographs. Mr. Allen also writes about the fact that some figurative works were “destroyed” by the artist by painting over them and turning them into abstractions–they’re wild. Mr. Allen also points out that de Kooning appears to be a rather dramatic influence on the painting that Mr. Richter does to make the abstract works.