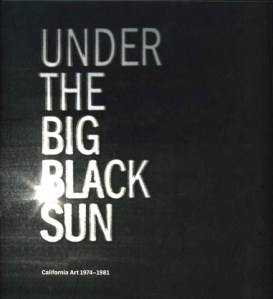 A poster for MOCA LA's 'Under the Big Black Sun' survey, as part of 'Pacific Standard Time.' (Courtesy MOCA)

Over on his Blouin Artinfo blog, Los Angeles County Museum on Fire, William Poundstone notes that a handful of writers have floated the idea of launching initiatives in their own cities in the style of “Pacific Standard Time,” which saw the Getty bring together dozens of museums to celebrate the historically under-recognized art of Southern California from 1945 to 1980.

Martin Knelman wants a “PST” in Toronto to celebrate that city’s art history, for instance, and Lilly Lampe asked in a recent blog post if Atlanta might benefit from such an initiative, Mr. Poundstone notes. (The estimable Emory professor James Meyer told Mr. Lampe via e-mail that “Dallas, Houston, Miami, and Chicago are much more interesting” than Atlanta. Brutal.)

No doubt some “PST” copycats will be launched in coming years, and their quality will vary. (We’re lobbying for a Washington, D.C., one.) But a larger issue remains regarding “PST”: most of the shows associated with it are not traveling, and none of the ones that are traveling are scheduled to come to New York, as the Los Angeles Times‘s Jori Finkel pointed out last year.

As exciting as the shows were in L.A.–or will be in any “PST”-inspired efforts–if they close without a tour, without even a second stop, a huge opportunity will be lost, and the chance to actually alter art history will be severely weakened.