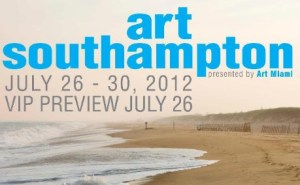 The Art Miami fair company today announced plans to create a new fair called Art Southampton, which will take place July 26-30 in its namesake Long Island hamlet with around 75 modern and contemporary galleries. A news release notes that the fair will be housed in a 75,000-square-foot pavilion “behind the Southampton Elks Lodge and adjacent to Mercedes Benz of Southampton.”

Art Southampton will compete in the summer fair game with Art Hamptons, running July 13-15 this year, and artMRKT Hamptons [sic], scheduled for July 19-22, which was started by Max Fishko and Jeffrey Wainhause, former employees of the conglomerate that owns Art Hamptons. Their launch of the fair prompted a legal battle last summer.

Do the Hamptons have enough wealthy collectors to justify three separate fairs on three successive weekends? We’ll see. Scope also used to operate there, though it shut down the branch of its fair in 2009, during the worldwide economic crisis.