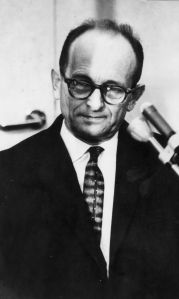 Eichmann may have known the location of the art. (Corutesy Getty Images)

Some art historians now believe that 250 to 500 artworks taken by the Nazis and valued today at £500 million ($800 million) may be buried inside a silver mine under the Erzgebirge mountains in Germany, not far from the Czech border, according to a report in the Daily Mail. Specialists will descend into the mine in May in search of the art. (Thank you to Artspace’s A+ blog for bringing the item to our attention.)

The missing works were owned by Baron Ferenc Hatvany, a Hungarian-Jewish art patron whose collection included pieces by Manet, Monet and Cezanne. Adolf Eichmann, one of the Nazis responsible for leading the Holocaust, took them near the end of World War II. The Daily Mail explains why some believe the art is there:

Viennese historian Burkhart List, 62, says he has acquired documents from old Wehrmacht archives that report a mass shipment of the Hatvany collection to two subterranean galleries, measuring 6,000 by 4,500 feet, in the Erzgebirge Mountains.

With the permission of the mayor of nearby Deutschkatherinenberg, Hans-Peter Haustein, he deployed a neutron generator inside the mountain to probe for the secret chambers.

The device revealed that, 180 feet down, there are workings detailed on no maps and they appear to be man-made, not natural.

Though there are no signs of the artwork yet, Mr. Haustein is convinced that the pieces are there.

The Nazis were famed for secreting away artworks in mines, which have the sort of stable, temperate climate that is ideal for storing artworks. They even hid part of the Ghent Altarpiece, along with more than 1,000 other works, in a salt mine in Austria. Here’s NPR on that story:

The local SS commander had wired the mine with dynamite, determined to destroy all the art as the Allies began closing in.

[Art historian Noah] Charney says the Ghent Altarpiece was eventually saved through the heroism of salt miners who disabled the bombs, and the work of local Austrian resistance fighters and Allied “monuments men” whose job it was to hunt for stolen art.

Updated: Because of a calculation error, an earlier version of this article incorrectly stated that the total value of missing art was $1.2 billion, instead of $800 million.