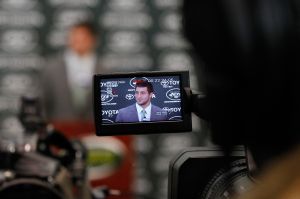 Quarterback Tim Tebow addresses the media as he is introduced as a New York Jet at the Atlantic Health Jets Training Center on March 26, 2012 in Florham Park, New Jersey. Tebow, traded from the Denver Broncos last week, will be the team’s backup quarterback according to Jets head coach Rex Ryan. Tebow, the 2007 Heisman Trophy winner, started 11 games in 2011 for Denver and finished with a 7-4 record as a starter. He led the Broncos to a playoff overtime win against the Pittsburgh Steelers in the first round before eventually losing to the New England Patriots in the next round.