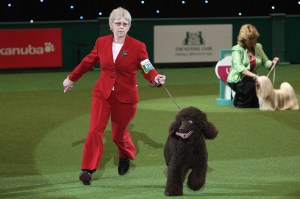 Last night the artist Dustin Yellin opened his four-piece “investigations of a dog” show at Half Gallery, black and white studies for a series that’s much larger, in size and scope, that he’s recently undertaken at his studio in Red Hook. Mr. Yellin greeted gallery-goers on the sidewalk outside the Lower East Side space, including this reporter, with whom he shared a brief, strained conversation not about dogs, in addition to a more involved one that was about dogs.

The Observer: [Steered over to the artist way too early] Uh, how do you think the opening’s going?

Well [OH MAN] er, how do you think the art works translate to this well-lit, Manhattan context?

I don’t know. I just wanted to make scenes that are hallucinations through the eyes of a dog and that are really low through a window, and in black and white. I wanted to have them at dog’s-eye level [he pointed to a piece in the window at knee-height], so that’s why that one’s where it is.

What about very small dogs, like Italian Greyhounds? They’re not going to be able to see that.

So why are these monochromatic?

Because that’s how dogs see.

Do you have dogs?

How many do you have?

Why is that number not more precise?

Because everyone brings their dogs to the studio to gather together. It’s a doggie haven.

What kind of dogs do you have?

Oh so those are like big dogs. Dog-y dogs.

Oh yeah, it’s a serious dog world over there, yeah.