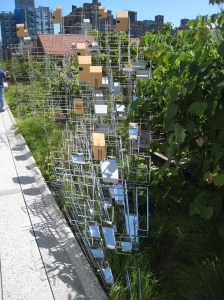 Sarah Sze's installation on the High Line, 'Still Life with Landscape (Model for a Habitat).' (Photo by schmuela/Flickr)

The International Association of Art Critics’ United States chapter announced yesterday the 24 winners of its 2011 awards. The New York Times first reported the news. Voted on by the 400 members of the organization, the citations are made for first and second place in 12 different categories, with three categories specially addressing New York, which were decided as follows:

The awards will be presented at Asia Society, on the Upper East Side, on Monday, April 2. The full list is available on AICA-USA’s website.