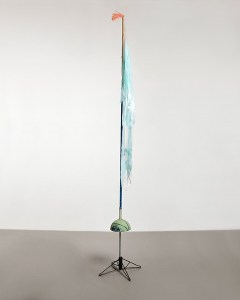 “I think there are very few people interacting with objects the way he is,” said Mr. Sheftel about Mr. Da Corte, who hunts grocery stores, street corners and IKEA for materials for his humble but humorous assemblages that utilize everything from Coca-Cola bottles to fingernails. Mr. Sheftel was in the middle of overseeing the installation of the show when Gallerist spoke with him. “There’s a lot of interest in the poetic way he deals with found objects and rehabilitates them.”

Mr. Sheftel met Mr. Da Corte when the artist was still a grad student at Yale—he received his MFA in 2010. Mr. Sheftel began following his work. “I knew him and then I started hearing more and more about him, and his work. Other people were taking interest in his work—collectors that I respected, dealers, writers.”

Upon Mr. Da Corte’s graduation from school, Mr. Sheftel seized the opportunity to start working with the artist. “I went out to Philly and started showing his work to people and the response was really great.”

Mr. Da Corte’s sculptures employ found objects and ideas that we, as a culture, consume and discard. For this show, one of the found objects is the video for Soul for Real’s 1995 song, “Candy Rain,” that was #1 on Billboard’s Hot R&B/Hip-Hop Songs that shows the young boy band singing romantic lyrics against glittering low-budget backdrops.

“It treats [the video] almost like a found object,” said Mr. Sheftel. “We look at this thing that was number one on the charts and now it’s completely foreign, and now we recognize the aesthetic cues. Alex was hoping to make us look at how we consume things.”

“It’s kind of that romanticism with objects,” said Mr. Sheftel, “but in a different way. Rather than bodily fluids, [Mr. Da Corte’s] looking at things like shampoo. Shampoo is a really intimate substance. We put it on our bodies, it seeps into us. It gets under our skin. So it’s not really abjection, but it’s related—it looks at the things that are close to us now. It’s a different conversation when Alex is going to the dollar store in Philly and using that as his art supply store and looking at off-brand soda, shampoo, and low-level items that engage in a conversation about class and race.”

“I am attracted to these items for their accessibility,” Mr. Da Corte told Gallerist via email. “Despite their common place, they offer promises of escape and pleasure through smell, color and texture. Framing shampoo, removes its utility, allowing me to reconsider it as a voyeur and scientist.”

Mr. Da Corte’s upbringing also heavily informs his work. “There’s a Philly bent too, I think,” said Mr. Sheftel. “Looking in Fishtown, Philadelphia. He grew up in Camden and went to Philly for school.” Mr. Da Corte, who divides his time between New York and Philadelphia has an upcoming solo presentation at its Institute of Contemporary Art.

The show in New York will present a combination of works including sculptures on plinths, a tabletop sculpture and some of Mr. Da Corte’s shampoo paintings—paintings made with shampoo pigment whose sludgy pastel surfaces are reminiscent of oil spills.

So how did Mr. Sheftel get the up-and-comer on board for the gallery’s first solo show? “We have a nice relationship,” said Mr. Sheftel. “I think he was excited about the gallery and the space. And we have a nice rapport and understand one another’s processes, which helps.” With the show opening the Sunday before Armory week, we imagine many people will soon come to understand the processes behind the work of Mr. Da Corte.