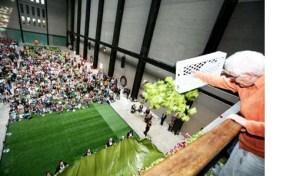 Ms. Knowles at the Tate (Photo courtesy of artsandecology.org.uk)

Performance artist Alison Knowles will stage her landmark Fluxus score Make a Salad at the High Line on April 22 to commemorate Earth Day.

First staged in Baltimore, in 1962, Make a Salad was a famous score in which Ms. Knowles did just what the title dictated, and in large quantities, for her audience. Since then it’s been repeated in other venues, usually for art historical purposes, notably at the Tate Modern in 2008.

“Alison Knowles is an influential figure in contemporary art and in the world of performance,” said Cecilia Alemani, the Donald R. Mullen, Jr. Curator and Director of High Line Art. “I look forward to re-staging her legendary work for the first time in a public space in New York City. The performance will unite the playfulness of a great artist with the joy of sharing a communal meal at a breathtaking location on the High Line.”

The piece begins at 10:00 a.m. and goes until 1:00 p.m. The release also mentions that, earlier in the month, the High Line will install a new sound installation by Uri Aran called Untitled (Good and Bad) that has affected voices reading names of animals from the plant beds between 25th and 26th Streets.