In case you thought the Occupy Movement had somehow vanished during the cold but relatively brief Winter, Occupy Wall Street protesters returned in force Saturday to familiar locales, apparently determined to make sure we knew they were still around and still D.T. P. (Down To Protest).

The Times reported early Saturday night that protesters “embarked upon a winding march” which led to a few arrests in and around the original home of the protest, Zuccotti Park.

In several respects, the march on Saturday was similar to the inaugural one. The crowd was on the small side but spirited and marched past the bronze sculpture of a bull at Bowling Green, which had served as a mustering spot for the first march. The marchers were accompanied by police officers on foot and on scooters who at one point blocked access to Wall Street, just as they did on Sept. 17…

Around 8 p.m. on Saturday a text went out stating “Liberty Square is being RE-OCCUPIED! 500+ people and growing! Come on down! Bring blankets & food!”

There was a brief celebrity appearance by Michael Moore, who endured some heckling from the assembly over his personal wealth. Code Pink, “a women-initiated grassroots peace and social justice movement” dedicated to ending United States-sponsored war and occupation was also in evidence.

The crowd appeared to grow throughout the night, as evidenced by live footage broadcast over journalist Tim Pool’s UStream page. Mr. Pool aired a “human mic” invoking calls for a “general strike” as well as an instance of a form of “direct action”–protesters linking arms and charging across Liberty Square at a full run.

Waves of marchers continued to fill the park well into the night. Around 10:30 p.m. it looked as though some protesters were attempting to set up tents as chants such as “We are not leaving” and “Occupy the food supply” rippled through the crowd. 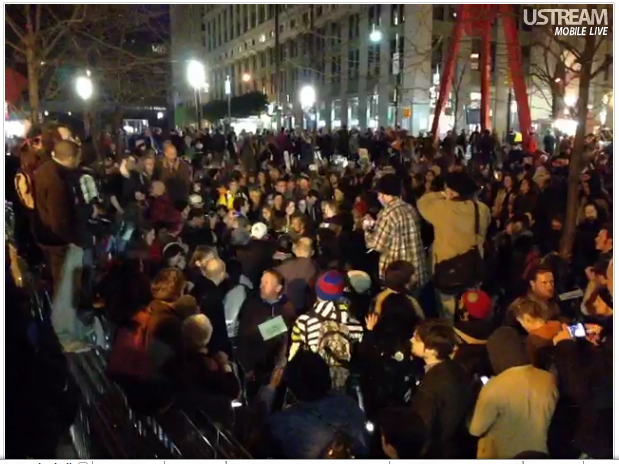