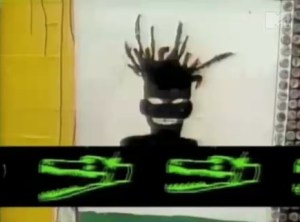 A clip from Basquiat's 1985 'Art Break.' (Courtesy the artist and MTV)

It’s a big day for television in the contemporary art world.

Morley Safer is prepping a 60 Minutes episode about art, which will air this weekend. And now The New York Times reports that MoMA PS1 and Creative Time are working with MTV to resurrect “Art Breaks,” the bite-size video art nuggets that used to air during commercial breaks on the cable network.

The initiative has commissioned five artists, including Mickalene Thomas and Rashaad Newsome to make new works, and also uploaded some classics, by Jean-Michel Basquiat and Richard Prince, to a dedicated Tumblr page. Fun stuff. The new clips will begin airing on MTV on April 2.

In honor of this nice development, here are two more commercial-sized video artworks to spend some time with this Friday morning. First up, Stan Douglas’s Monodramas, which range from 30 to 60 seconds and were first broadcast during commercials on TV in British Columbia. Though nothing really happens in them, they’re amazingly captivating.

On the more dramatic end, below is an almost-naked Chris Burden wiggling himself through a large expanse of broken glass. A shorter version of this clip was shown on TV back in 1973.