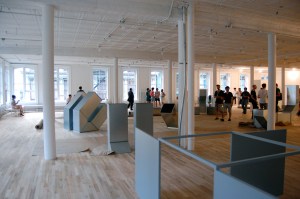 The SoHo alternative gallery Artists Space is marking its 40th anniversary this year, and today announced a bevy of activities that it has planned for the rest of 2012. Perhaps most exciting: its second location, in TriBeCa, Artists Space: Books & Talks, which we wrote about back in February, will open on March 31.

But there are other projects on the horizon! The artist Stephen Prina (who is showing at Petzel right now, and who had a one-night barn-burner of a collaboration there with Wade Guyton during Armory Week) is going to create a special concert to mark the anniversary, “bringing together some of the key protagonists from the past 40 years of Artists Space.”

Also, the gallery will honor Alan Vega, one of the founders of the storied New York electronic band Suicide in the late 1970s, at its Friends of Artists Space dinner in May. Mr. Vega was a member of the downtown art world at the time the institution was founded, and created work for an issue of Art-Rite, the journal that Edit deAk (an assistant director at Artists Space) and Walter Robinson, produced at the the time. (A video that Ms. deAk, Mr. Robinson and Paul Dougherty made to accompany Suicide’s “Frankie Teardrop” song in 1978 is on view at MoMA right now.)

One final bit of news: May 3-6, during Frieze New York, Artists Space will take over the SubMercer club in SoHo with DJs and midnight performance by artists like Emily Sundblad and Karl Holmqvist.

Next up at its SoHo exhibition space is “Radical Localism: Art, Video and Culture from Pueblo Nuevo’s Mexicali Rose,” curated by Marco Vera and Chris Kraus.