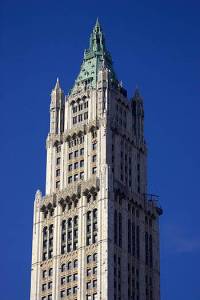 Next month, the art world data service and journalism outlet Artnet will move from its current space at 61 Broadway, overlooking glamorous Zuccotti Park, to the Woolworth Building. The company plans to move into the 26th floor by April 16, leaving a space they’ve occupied for 12 years.

President Jacob Pabst said that the plans to move have been in the works for a year, following expansions in the company’s online auction and “indices” divisions, the latter providing art market analysis for the value of certain artists or trends in art history.

Nice is an understatement, if you’ve ever seen the ceilings at the Woolworth! Next week is the company’s last in their current building, with everyone working from home until the 16th.