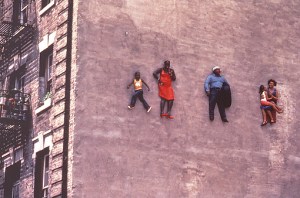 A wall piece by John Ahearn in the South Bronx. (Courtesy the Drawing Center)

This week is all about the Armory Show, but details are starting to emerge about rival Frieze New York, which sets down on Randall’s Island in just two months. Artnet has the scoop that, as part of the fair’s public art programming, John Ahearn will show 25 of the original 30 painted plaster sculptures from his “South Bronx Hall of Fame” show, which he made in the late 1970s. Mr. Ahearn created the original casts of local residents who visited the South Bronx alternative space Fashion Moda, run by founder Stefan Eins, Joe Lewis and William Scott.

As Artnet notes, Fashion Moda was located nearby Randall’s Island from 1978 through 1993. The space is currently unoccupied, but those looking for a break from the fair can take a roughly eight-minute car ride across the Robert F. Kennedy (Triborough) and Willis Avenue Bridges to 2803 Third Avenue, to see where the space once stood.

In a 2010 profile of Fashion Moda for the NY1 television station, Mr. Ahearn, who shows with Alexander and Bonin in Chelsea, told an interviewer of the “South Bronx Hall of Fame” project, “After I did one casting, I realized, this was heaven, this was fantastic.” Fair attendees will have a chance to find out for themselves. Each day three to four people will be able to pay $3,000 to have a plaster cast made of their own face.