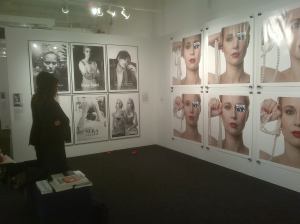 Work by Sanja Ivekovic at the booth of espaivisor – Visor Gallery. (Photo by Andrew Russeth)

The Volta Art Fair was bustling on Thursday afternoon when Gallerist paid a visit, and it felt, as it has in past years, like a maze. Those layout issues aside, the conceit of the fair remains wonderfully easy: each dealer is  allowed to bring only the work of a single artist: 80 exhibitors, 80 artists. (Just about the number of artists Gagosian represents.)

The first artworks we saw upon getting off the elevator on the 11th floor of the 7 West 34th Street building were the bright, modestly scaled abstractions of Andrew Masullo, one of the stars of the 2012 Whitney Biennial. Mr. Masullo shows with Feature Inc. in New York (its proprietor, Hudson, had a few of his works in his Independent booth), but he was being presented here by Boston’s Steven Zevitas Gallery, which had sold a number of works at prices ranging from $6,000 to $18,000.

Another Boston outfit, Samsøn, was showing the work of painter Matt Rich, who slathered acrylic paint in muted colors on paper that had been cut into geometric shapes or long strips, then pieced together as in a quilt. Some of his smaller sphere compositions had sold for $1,000 each.

New York’s Mixed Greens gallery was showing photos by Julianne Swartz, who makes portraits by capturing people’s images in droplets of water on her finger. Three of these had sold at $2,800 each.

Deconstructed American flags by Jeremy Dean were on display at the booth of Cynthia Corbett Gallery, who was in town from London. To make his pieces, Mr. Dean unraveled flags and used the thread to reconstruct them line by line, also including text or vintage-styled propaganda photographs of women riding missiles and American icons (Walter Cronkite, John Wayne, Superman). His Hero/Hostage work, which features those words in gold paint, sold for $55,000. Two smaller pieces sold for $10,000 each.

Twenty-two-year-old Howard University student and conceptual artist Wilmer Wilson IV performed during the day at Conner Contemporary’s booth, placing “I voted” stickers all over his almost-nude self throughout the day. After covering his entire body, Mr. Wilson peeled off all of the stickers. Mr. Wilson had photographs of himself covered in stickers and seals on sale. Listing price was $2,950 and several had been sold.

New York’s Dodge Gallery had works by Sheila Gallagher, who had made assemblages of melted plastic and trash, which resolved themselves from a distance as a landscape, a Klimt-like eastern garden and an Islamic design of vines and flowers. All three of her plastic works had been sold, for $14,000 to 16,000 each.

Parker’s Box, of Brooklyn, housed Stefan Sehler’s acrylic paint on plexiglass. Though Mr. Sehler had previously worked with foliage and natural subjects, his work at Volta was an abstract composition (which resembled a photograph of the moon), red and white stripes and a trompe l’oeil piece that looked like metallic spray-painted wooden planks. The pieces were priced at $18,000 apiece.

Portland’s PDX gallery was showing the work of artist Adam Sorenson, who makes trippy paintings of rock formations, in greys alternated by shots of eerie neon green, reds and blues. Some of his very small works had found buyers at a comfortable $800 price point.

A few of the offerings were particularly impressive, like Rachel Beach’s brilliantly colored, Richard Nonas-riffing wooden sculptures at the airy booth of Lower East Side’s Blackston gallery, and at Visor Gallery, from Valencia, Spain, large prints–priced in the mid-five-figures–that combine advertisements for luxury goods with typed testimonials from women about domestic abuse, by Croatian artist Sanja Ivekovic, who has a retrospective on at the Museum of Modern Art right now. And then there were Mr. Masullo’s paintings, bracing, humble abstractions that are finally winning favor in the museum world–and the market.