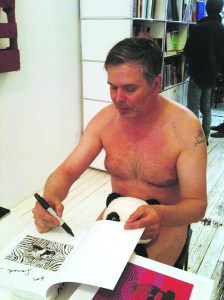 Last Saturday afternoon, the artist Rob Pruitt, who is known for his glittery paintings of panda bears and his tongue-in-cheek, Golden Globes-style “Art Awards,” was signing books, naked, in the Karma bookstore, in the West Village. He sat at the head of a table arrayed with copies of his 2010 volume Pattern and Degradation, each with a custom cover. One was composed of multiple books of matches. One came with a pair of handcuffs. One was sandwiched between copies of the New York Yellow Pages. As a fig leaf he employed a stuffed animal panda bear.

A woman asked Mr. Pruitt to sign a package of toilet paper with a panda bear logo.

Another woman arrived, with her young daughter. “Are you shy about that man?” she asked. “You can go say ‘Hi’ to him.” The girl demurred.

“Should I cover up?” Mr. Pruitt asked.

“No, no,” the woman said. “She has to learn about these things sometime, right?”

“Better in a safe environment,” Mr. Brown chimed in.

More people arrived. “Welcome to my book signing,” Mr. Pruitt said, sounding almost excited. The store was getting crowded. People nearly bumped into the Dan Colen “trash” sculptures hanging from the walls. Mr. Brown’s cairn terrier, Dotty, made off with a plastic container from the girl’s stroller.

“That dog’s eating our snacks!” her mother cried out in mock alarm.

Mr. Brown apologized for his dog.

Things were getting a bit chaotic, but not, apparently, as chaotic as they had been earlier.

“We were setting up and running late and there were already 10 people in here, and Rob was naked in the back room,” said Karma’s proprietor Brendan Dugan. “Four women started walking back there, and they must have thought, ‘What the hell is going on?’”

“I’m naked,” Mr. Pruitt scribbled in one of the books, next to a drawing of a panda. “Please love me.”

“Why do I do these things?” he asked no one in particular.

“Because I’m so insecure,” he answered himself. He turned to Mr. Brown’s daughter. “Tallulah, this is what you call grasping. It’s a neediness. Someone who just wants more attention. Don’t ever be like that.”