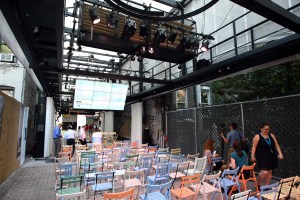 The BMW Guggenheim Lab in New York in 2011. (Photo by Neilson Barnard/Getty Images)

The BMW Guggenheim Lab, the temporary structure that inhabited a lot in downtown Manhattan earlier this year, hosting public programs (and a branch of Bushwick restaurant Roberta’s) will not make the next stop in a planned tour, in Berlin’s Kreuzberg neighborhood in May, according to Bloomberg.

The wire service cites a report in a German newspaper that says “left-wing” protestors had threatened to “derail” the project, arguing that it could result in “higher rents and new luxury residential developments” in the area.

In a statement released to press, the Guggenheim offered an explanation:

In response to police and local authoritiesʼ high hazard assessment, the Solomon R. Guggenheim Foundation has decided to withdraw the BMW Guggenheim Lab from the site planned in Kreuzberg, Berlin. This decision follows threats against the project. … While we welcome vigorous debate, we cannot risk the possibility of violence, as raised by a small minority.

A representative at the Guggenheim told Gallerist that the museum is currently deciding how to proceed. The museum had been scheduled to visit nine cities during its six-year run.

With the Deutsche Guggenheim set to close at the end of the year, Berlin residents are going to be sadly Guggenheim-deprived soon.