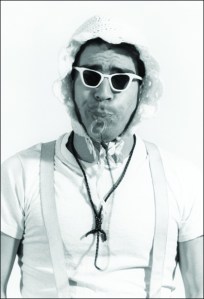 A postcard for a performance by Michael Smith at Electronic Arts Intermix. (Courtesy EAI)

Following in the tradition of its Ice Cream and Creamier books, Phaidon just recently released another hulking contemporary art survey. This one is called Defining Contemporary Art: 25 Years in 200 Pivotal Artworks—the works are selected by eight top-flight curators like Bice Curiger, Massimiliano Gioni and Okwui Enwezor. It’s a pleasurable anthology, with some nice quirks. But more on that another time. We just wanted to share this tiny excerpt from a roundtable discussion among the participants and Phaidon editor Craig Garrett. In this portion, New York writer and curator Bob Nickas, one of the book’s contributors, shares his thoughts on the state of the art world today:

Bob Nickas: Specific time frames simply don’t matter, or they will only drive one agenda or another. There’s back then, and there’s where we find ourselves now. Back then you didn’t have the over-inflated art market and the so-called art world; today, it’s like we have to baby-sit a child with gigantism who’s been fed steroids. …

In other words, it’s basically Baby Ikki with roid rage. Which is a nice image.