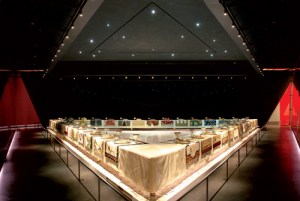 On April 18, Associate Justice Sandra Day O’Connor, broadcast journalist Connie Chung, and Nobel Prize-winning author Toni Morrison will be among the honorees at the Elizabeth Sackler Center for Feminist Art First Awards, for being “First in their Fields.” The awards ceremony, which is prompted by a celebration of the fifth anniversary of the Elizabeth A. Sackler Center for Feminist Art, will be presented to 15 women, each of whom has made a “remarkable achievement and contribution” in her respective profession.

The 15 recipients represent a wide spectrum of professions, from Judith Rodin (the first woman to lead an Ivy League institution) to Wilma Mankiller (deceased), the first woman chief of an American-Indian nation (Cherokee Nation, 1985).

“The selection of women was largely guided by Dr. Sackler and the Fifth Anniversary Committee,” Catherine Morris, the curator of the exhibition, told Gallerist via email. “[The committee] is composed of members of the Council for Feminist Art, a museum membership and support group for the Elizabeth A. Sackler Center.”

What was the curatorial motivation guiding the selection? “I believe the ambitious goal was to really try and include as wide a variety of important women from across various fields and disciplines.” It also includes art historian Linda Nochlin and feminist art critic Lucy Lippard.

The recipients will each receive a glass sculpture created by Judy Chicago, the artist who created The Dinner Party the feminist work comprised of a triangular grouping of three tables, which represents 1,038 women in history—39 women of whom are represented by place settings and 999 of whose names are inscribed in the floor that the table rests on. The Dinner Party is a permanent installation in the Elizabeth A. Sackler Center for Feminist Art.

The recipients will also become “twenty-first century, permanent members of the symbolic fourth wing of The Dinner Party,” according to a statement issued by the museum.

What is the “symbolic fourth wing”?

“The conception of the First Awards was tied to the idea of these important women honorees being members of their generations that would be included in The Dinner Party, were there to be a fourth side of the table, or were the piece being conceived of today,” said Ms. Morris. “This seemed particularly fitting as each side of Judy Chicago’s iconic work represents a millennium, and we find ourselves celebrating the Sackler Center still relatively in the dawn of a new one.”

But this will not include any physical change to the permanent installation. “Let me be clear,” said Ms. Morris, “The Dinner Party is in no way being altered or changed.  It remains the complete and discrete work of art it always was and will be.”

The ceremony, which will be presented by Elizabeth Sackler and Gloria Steinem and hosted by broadcaster and best-selling author Laura Flanders and CNN anchor Soledad O’Brien, immediately precedes the 2012 Brooklyn Artists Ball.