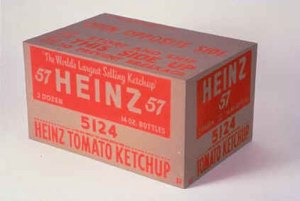 The Heinz sculpture by Warhol, from 1964. (Courtesy the FBI)

“He was a con man and a thief,” U.S. District Judge P. Kevin Castel declared in court today. “And not a particularly good one at that.”

Judge Castel was talking about James Biear, a caretaker convicted in 2010 of stealing some $3.2 million and a handful of artworks from an unnamed “elderly millionaire” who was in his care in New York. Biear has been sentenced to 10 years in prison.

Among the artworks stolen were a Warhol sculpture of a Heinz box that was given to the victim by the artist in 1964, “a playing card on paper” by Duchamp, a Picabia drawing, an Alex Katz charcoal drawing and a Joe Brainard watercolor.

Said U.S. Attorney Preet Bharara in a news release: “Instead of caring for his vulnerable elderly employer, Biear callously defrauded him of millions of dollars of cash and cherished works of art.”