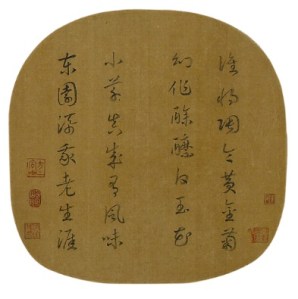 Calligraphy by the Emperors of the Southern Song from the 12th to the 13th centuries. (Courtesy Sotheby's)

Sotheby’s first-ever auction of Classical Chinese paintings during Asia Week was a blowout success in terms of total sales, moving $35.2 million worth of art on a $13.7 million high estimate. Yes, it nearly tripled its high estimate.

Including buyer’s premium, every single one of the top 10 lots beat its high estimate, with calligraphy by the Emperors of the Southern Song from the 12th to the 13th centuries fetching $5.7 million on an estimate of $750,000 to $1 million.

Despite those gigantic numbers, bidders did hesitate on a few items, with 27 percent of the lots on offer failing to find buyers, a solid but hardly perfect showing.

So far, Sotheby’s has netted $61.8 million in Asia Week sales, beating its $41.3 million high estimate by some 50 percent.

“The results, especially the records set in the auction of Classical Chinese Paintings, reaffirm New York’s position as a global centre for the Asian Art market,” Sotheby’s vice chairman Henry Howard-Sneyd said in a statement.