“Plan A is the only plan,” Christie said.  “Bruce Harris and Phil Kwon should meet any objective analysis  of their background, their qualifications, their careers and their personal integrity.”

Asked if the votes are in place for nominees Phillip Kwon and Bruce Harris Christie said only that his staff has been counting votes and he would expect to hear from them if there is a problem.

“I’m hopeful but in terms of vote counts, head counts, I don’t participate in those types of things, I have staff that do that.  I assume that they are in the midst of doing that and I assume if there is anything I need to know I’m sure they will come and tell me.”

Harris and Kwon face a tough road to confirmation as Democrats have questioned both the qualifications of Harris and the party affiliation of Kwon.  Harris, a Republican, has no trial experience, while Kwon faces questions over his party affiliation.

The governor has touted Kwon as an independent, however the former Assistant U.S. Attorney was a registered Republican in New York City until last year.  Democrats argue that confirming both men would skew the balance on the court.  The administration has countered with the argument that even if Kwon is considered a Republican, balance is maintained with four Republican justices, two Democrats and an independent.

In a note to reporters Tuesday, administration officials pointed to the past make-up of the court which has had four Democrats seven times since 1947.

Christie dismissed Democrats’ concern and said both men are eminently qualified for the post and asked for a fair assessment of their qualifications.

“I believe in the end and I’ll continue to believe until proven otherwise that despite all the kind of political back and forth that happens that members of both parties in the state Senate understand how important decisions these are and how much time I’ve spent on it personally. And I hope they will give an objective look at these two guys because if they do they are going to wind up voting yes,” he said.

Tuesday, the governor’s office released a letter from the Judicial Advisory Committee endorsing the qualifications of both men. What’s more, Christie said, he fulfilled the edict of Senate President Steve Sweeney who a year ago told the governor he hoped to see diversity in the future nominees.

“I’ve done everything I can do at this point by nominating two very qualified and diverse candidates for the Supreme Court, which is the challenge the Senate President placed before me last March.  I’ve met the standard that he laid out.”

Christie said because he met that standard, Democrats now need to uphold their end of the bargain.

“I suspect since I met the standard of putting forth qualified diverse candidates that they are going to hold up their end of the bargain and confirm those qualified, diverse candidates so we can finally for the first time since March 2010 have a complete Supreme Court filled with justices who were nominated by a governor and confirmed by the state Senate.” 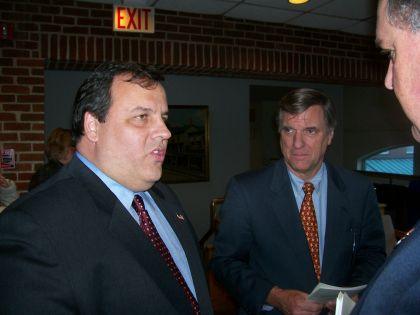