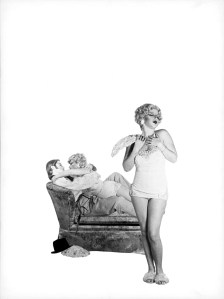 Contrary to widespread belief, Cindy Sherman’s Untitled Film Stills (1977-80) are not her earliest works. Between 1975 and 1977, while Ms. Sherman was still a student at the State University of New York at Buffalo, she created a series of black-and-white photographs in which she played characters in a murder mystery. She then cut out the characters and reassembled them in meticulous tableaux. Metro Pictures is exhibiting these unique assemblages at its booth at the ADAA Art Show, which runs through Sunday at the Park Avenue Armory.

“It was originally one piece that was a Hollywood-style narrative and she played thirteen different characters herself,” said Alexander Ferrando of Metro Pictures. “She photographed herself and then excruciatingly cut out by hand all of these figures from the photographs and placed them directly on the wall.”

What Mr. Ferrando is referring to is the manner in which these cut-outs were first shown in 1976, at the downtown alternative gallery Artists Space. Hundreds of figures were composed in narratives and mounted individually onto the wall. “Since then they have not been shown anywhere,” he added. Now the artist has arranged them on paper and framed them.

The narrative, which is composed from a series of 80 framed collages, begins at a murder victim’s funeral and flashes back to the scenes from the crime, with characters who would fit in a Weegee photograph, replete with knife-wielding murderers, trench-coated detectives and Marilyn-like blonde actresses.

Though the gallery declined to name a price for the works, one photograph from Ms. Sherman’s “Murder Mystery People” series, the source images for these collages, sold for $16,401 at a Christie’s auction in 2004. But that work was from an edition of 20, Mr. Ferrando noted. The collages that the gallery is offering at the Art Show are unique.

These humble, hand-crafted collages offer a counterpoint to Ms. Sherman’s large-scale glossy color work on view at her MoMA retrospective. Though nicely timed to coincide with that major exhibition, the ADAA display also marks the release of Cindy Sherman: The Early Works, a new catalogue raisonné that was just published in German by Hatje Cantz and will be published in English in May.