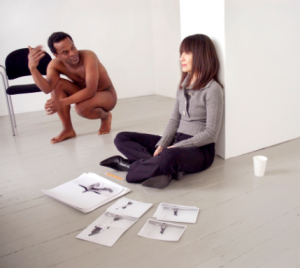 Last week, artist Clifford Owens told The Observer in an interview that he planned to force a sex act on an audience member for his final performance at MoMA PS1. The performance, based on a score written by artist Kara Walker, called for French kissing an audience member and demanding sex. He had performed it several times during his 10-month residency at the museum, and planned to take the performance further and to break out of a comfort zone he had settled into. In response to the news of Mr. Owens’s plans, which we shared in search of comment, Ms. Walker responded via email that she wasn’t aware of his plans for his final performance and stated, “If he goes through with it he leaves no room for imagination or freedom of choice.” The next day, when she withdrew her involvement from Mr. Owens’s performance, demanding, via email, that he “cease and desist” from using her score, The Observer found itself an unwitting participant in the evolution of that last performance.

The performance went forward as scheduled on Sunday, though with a change—Ms. Walker joined in the performance with Mr. Owens, a performance he normally conducts on his own. While he normally kissed and groped people in this performance, and this time had plans to take it further, he ended up barely kissing two people, his hands clasped firmly behind his back and Ms. Walker moving carefully around him as he engaged with the audience.

“I’m sure Kara had no idea what he would do,” said RoseLee Goldberg, performance art historian and the founder of Performa—a non-profit interdisciplinary arts organization which puts on a biennial performance festival by the same name. We reached out to Ms. Goldberg to have a dialogue about this unique performance. “Initially she was happy to let him run with it. But she also had no idea how she would feel, to have a man interpreting her score literally. At some point the piece took a turn and went off in a direction that she didn’t expect or like. That’s the risk they both take.”

“He takes a lot of risk in how far he can go,” said Ms. Goldberg. “but I think he’s actually quite controlled and in control. He approaches each project as a way to engage people rather than to frighten them off.”

Ms. Goldberg would know. She included Mr. Owens in the first Performa biennial in 2005. And enacting scripts written by others was part of his practice even at that time.

“Perhaps she came here to defend her work,” said artist Maren Hassinger to The Observer after the performance. “The tension for me lay in not knowing what was real and what was scripted.”

Ms. Goldberg believed Ms. Walker’s presence was more akin to that of a guardian. “The expression on her face said it all; watch out, pay attention. I felt she was there to remind us all that this (her ‘score’ for Clifford) is serious material and that the history that it represents is not to be taken lightly.”

Ms. Walker may have also been there to ensure the piece didn’t cross the line. “She chose to perform, to keep it simple and to fold herself into the performance. And at the same time she was in a sense protecting the audience,  making sure that the piece did not go off in the wrong direction. I’m sure she would have intervened if  it had gone too far.”

“I am of course responsible for creating this evil scenario,” Ms. Walker said in an earlier statement to The Observer. “The difference is, my proposal exists as a slip of paper, a planted idea—the performer reserves the right to simply not do it.” But perhaps she wasn’t keen on waiting to see whether or not Mr. Owens would exercise his right to do it.

As Ms. Goldberg pointed out, the performance of “scores” written by one artist for another to perform were a frequent practice for performance artists in the ‘60s and ‘70s like Yoko Ono, John Baldessari and John Cage. Thus, Mr. Owens’s performance of Ms. Walker’s score was nothing out of the ordinary in the history of performance art. And not following an artist’s score according to the wishes of the artist who wrote the score is sometimes the point.

“What’s intriguing for these artists and for everybody involved,” said Ms. Goldberg, “is that you look to the artist executing the work to totally shift the focus. Essentially to misunderstand the score  and to come up with entirely  unexpected results . The scores are cryptic, mere suggestions. They’re not precise scripts.”

While this gives the interpreting artist freedom, that freedom comes with risk. “I don’t know if all the artists will be happy with the decisions I make in terms of interpreting their scores,” Mr. Owens wrote in an essay for Artforum about his performances for Anthology. “I think that by the end, the identity of the author of the score could be lost, which is fine.” And while that may have been fine for most of the scores he interpreted for Anthology, this time, by Ms. Walker’s standards, at least, Mr. Owens had gone too far.

And thus, while Ms. Walker’s presence in some way frustrated Mr. Owens’s original goals for the performance, her involvement inadvertently fulfilled a corresponding goal by producing an unexpected theatrical experience that was fresh for all parties involved: the audience, which was expecting a highly sexually explicit show and got hardly a kiss out of Mr. Owens; Mr. Owens, who collaborated on this performance that he normally did solo; and Ms. Walker, who was stepping out of her area of practice to perform live, for the first time.

Ms. Walker’s presence in the performance was the most unexpected thing to happen to that score for some time. “I’ve seen that piece many times,” said Ms. Hassinger. “And it never had the weight it had [that day].”

The performance was vastly different than the one we had seen Mr. Owens engage in before. In prior performances, he had walked around the room with tremendous confidence and a swagger in his step, kissing, groping and pressing himself against strangers. In this performance, he barely kissed two people. Was it antithetical to the process for Ms. Walker to get involved and to influence the performance the way she did?

“Certainly, the press coverage and the expectation of the audience in knowing that there’d been this preview, and the various responses, affected it,” said Ms. Goldberg. But rather than breach the covenant, Ms. Walker became part of the process, which is within the ambit of Mr. Owens’s vision for the performance as a constantly evolving piece that helps to “write a history of black artists in performance.”

“He’s engaging history,” said Ms. Goldberg. “which is  what he does with all his work. And in a way, that’s comparable to what Kara does because she takes  disturbing and frightening aspects of this country’s history and creates extraordinary drawings, cutouts and installations from it.  The viewer becomes enmeshed in the material. Similarly, I get enmeshed in the history that Clifford presents. But I don’t view him as a scary guy who’s going to do terrible things to women.”

And what of the forewarning by Mr. Owens that he would take the performance to the next level? It was that potential turn that had gotten Ms. Walker involved in the first place.

This reminded The Observer of last year’s performance by Ann Liv Young during the Brooklyn is Burning event at MoMA PS1, when, according to one account she masturbated and urinated into a bowl, which she then poured on herself. Personnel at the museum cut the power while she was performing so she had no light or working mic.

But despite his statements to The Observer, Ms. Goldberg never feared that Mr. Owens would cross that line.

“Clifford is a very kind and gentle person,” she said. “which tempers his work, even when the subject matter is rather rough.” She contrasted his performance to the truly frightening work of the Viennese actionists, the violent 20th century action art movement known for staging spectacles of blood, meat and excreta. They did “things that were deeply disturbing—really bizarre things, drinking urine, defecating in pubic; things that would have made me run out the door.”

“Clifford is not trying to do that to his viewers,” she said. “All of his work involves conversations—between himself and artists, historians, writers and bystanders. And there’s a part of him that holds back, thank goodness.”