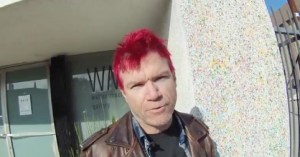 Mr. Gleason. (Still courtesy of a video review on Coagula.com)

Next month the Los Angeles-based art critic Mat Gleason will open Coagula Curatorial, a gallery named after the art journal he founded in 1992—a punchy, free magazine formerly known for the baddest (if sometimes spurious) bi-coastal arts coverage in town.

“I think Anthony Haden-Guest said that we had no coherent aesthetic of any kind,” Mr. Gleason said on the phone from Las Vegas, where he’d just curated a show, “which I take to be the highest possible compliment.”

Coagula Curatorial debuts on April 21 with a show by Tim Youd and photographs of Josef Beuys by Michael Montfort. The idea, Mr. Gleason said, is to pair an upcoming artist like Mr. Youd with a name like Beuys.

The gallery wouldn’t be worthy of the Coagula brand if it didn’t try to critique something, and Mr. Gleason said that the gallery is looking to a new model that emphasizes shows.

“I don’t want to get into agreements with artists where I have to caretake their career, I just want to concentrate on putting on great shows,” he said. “I kind of want to upend art history and change a lot of the rules, like how when you’re just starting out you have to start in a group show.”

The artist Max Estenger, a longtime friend to Mr. Gleason, said that though he has the reputation for pushing boundaries, his extensive art world connections should make the gallery a hit, even with the establishment. Moreover, he added, despite his friend’s reputation and orange hair, he’s a fairly nice guy.

“The art world is just used to the Carol Vogel treatment,” Mr. Estenger said, “and when it gets the kind of treatment that’s reserved for sports or whatever, it just freaks out.”

Mr. Gleason said his lease on the space in Los Angeles’s Chinatown is for two years.

“We’re not a fly-by-night organization,” he chuckled. “And you’re not the first person to ask if we are.”