Council Members Al Vann and Robert Jackson, who is chair of the Education Committee, introduced a resolution today asking the State Legislature to limit mayoral control of city schools. The resolution, which comes following growing controversy over recent school closings, calls on the legislature to give community councils approval over school closures and co-locations.

“The process for proposing and approving these significant changes to schools has disenfranchised communities and parents,” Mr. Vann said. “Providing a significant role for CECs in the co-location and school closure process will not only ensure that proposals are thoughtful and truly include input from communities and parents, but also will enhance community and parental involvement in our public schools.”

Currently, school closure and co-location proposals are made by the Department of Education and approved by the Panel for Educational Policy, which has never rejected a closure or co-location proposal. Under the Bloomberg Administration, the DOE closed over 100 schools moved more than 700 schools into shared facilities. Last month, the Panel for Educational Policy approved proposals to phase out, close or limit the number of grades in 23 schools and the DOE is calling for the closure of 33 schools at the end of this school year. These moves have led to substantial opposition from parents and politicians.

“The current administration continues to make decisions that adversely impact students and their families,” Mr. Jackson said. “It is well known that the PEP rubber-stamps co-locations and school closings without any consideration of a school community’s input.”

Mr. Vann echoed the criticism of the PEP and said giving community councils involvement in closures and co-locations would lead to a more thoughtful process.

“Since the PEP is nearly guaranteed to approve every DOE proposal, the quality and thoughtfulness of the proposals have declined and as a result our communities and students suffer. Providing a significant role for CECs in the co-location and school closure process will not only ensure that proposals are thoughtful and truly include input from communities and parents, but also will enhance community and parental involvement in our public schools,” Mr. Vann said.

Mayoral control of the city school system was originally established through a 2002 law that was renewed by the legislature in 2009. In 2009, mayoral control was renewed for another six more years. Passage of a Council resolution concerning mayoral control is largely symbolic as any changes to the law must come from the legislature. In late January, Assemblyman Keith Wright appeared at a town hall meeting and said he would propose a bill in Albany to end mayoral control. Mr. Jackson was also at that meeting and said he would introduce a Council resolution in support of the proposal.

Critics of mayoral control argue the closures and co-locations tend to favor charter schools and result in the unnecessary shutdown of local schools. Last month, Department of Education Chancellor Dennis Walcott defended mayoral control to The Politicker and said it has led to “tremendous” improvement for students in the past decade. 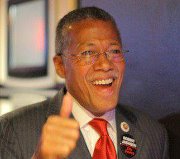