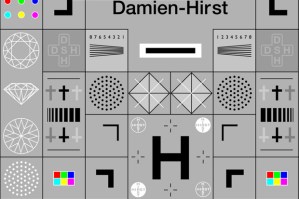 Damien Hirst has a new website with a fairly complete catalogue of work, a compendium of reviews and criticism, a detailed C.V. and a live feed of his assistants working in his studio. Uh, seriously.

Earlier today, a low-res video of Mr. Hirst’s assistants working away meticulously at a circular piece–resembling something like one of the artist’s pinwheel paintings–was projected as the backdrop of the website’s homepage. Both men were young, standing at the edge of a round table and lost in deep concentration as they colored in panels inside the pinwheel with black and gray paint. There were two views: one from the front, and one from overhead. The room was largely gray, with a small white fan plugged into the wall and a tray of paint in the corner. On the back wall was a large canvas, providing the room with some of its only color.

Mr. Hirst, naturally, was nowhere to be seen. There is an equally surreal feeling that the assistants are highly aware of the camera, trying with all their might not to look directly at the lens; that at any moment they might stare back, ostensibly blind and defenseless, at the viewer sitting at his computer, who, like a police lieutenant behind a two-way mirror in an interrogation room, is able to see the assistant-actors despite their lack of sight.

At this writing, the room is now empty and dark, though we can’t help but wonder, is this an artist website or just a less-violent version of Videodrome?