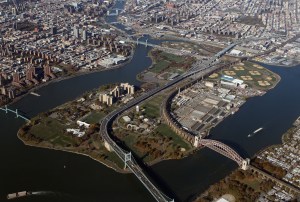 Randall's Island from above. (Photo by Bruce Bennett/Getty Images)

Last week, we reported that the Frieze Art Fair had selected Tom Eccles, director of the Center for Curatorial Studies at Bard College, to curate a sculpture park at its inaugural New York edition, on Randall’s Island, in May. Mr. Eccles has shared some details. The park will “represent a wide range of sculptural methodologies used today,” he said, adding that a number of works are being made specifically for it. He revealed that among the pieces will be an interactive installation from Tomas Saraceno, a new work by Cerith Wyn Evans that will involve fireworks and a sound piece by Susan Philipsz, as well as new works by Ryan Gander and Martin Creed and an existing hanging artwork by the late Louise Bourgeois.