Still smarting from last week, recent New York Observer punkee and How to Piss in Public author Gavin McInnes announced that he had gotten into a horrible car accident on the last leg of his FTW tour. His friend Steve (???) was in the car. Luckily, no one was hurt, though the footage looked gruesome.

By the way, this is what happens when you call a journalist “a Socialite reporter” and “a fucking bitch.” (How dare anyone accuse us of being mere socialite writers! Also, don’t copy and paste entire articles from other publications on your site…what are you, The Huffington Post?)

We wouldn’t usually make light of a situation as scary as this, except that Mr. McInnes seemed to have no moral dilemma doing so himself…going so far as to have a hidden camera capture his apology to Steve, who doesn’t accept and instead freaks out on the Vice founder.

Of course, none of it was real.

The accident, originally posted on Twitter March 21st, the same day our article about the prankster came out on the cover of The New York Observer:

Steve “leaving” the tour, and the subsequent blow-up:

Good prank! We’re very happy we didn’t take up our editor’s suggestion and call Mr. McInnes offering our condolences after the event, since it would have played right into the piss-eater’s hand. 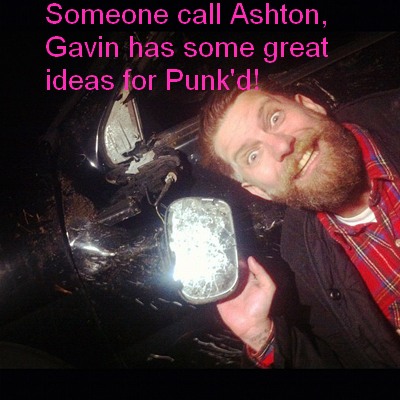 Filed Under: gavin mcinnes, Media Pranks, How to Piss in Public