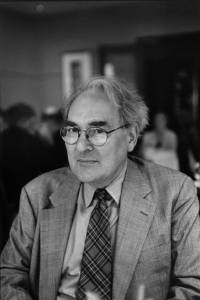 Hilton Kramer, the founder of the intellectual journal The New Criterion and a prolific critic whose aggressive support of high culture made him a polarizing figure in the arts, died early Tuesday morning at the age of 84. The cause was heart failure, according to The New York Times. Kramer is best known for his writing on art and he served as chief art critic at The New York Times for almost a decade, penning acerbic reviews that championed highbrow art over the depredations of popular culture.

“He’s best known as an art critic, but he’s much more than that,” said Roger Kimball, the current editor of The New Criterion. He wrote to Kramer out of the blue in graduate school and quickly became a regular contributor. “His purview is very much culture writ large.”

Kramer was born in 1928 in Gloucester, Mass. He attended Syracuse University where he studied literature. He started his career as a literary critic. He worked for the New Leader and, later, wrote briefly for The Nation. Kramer joined The New York Times in 1965 as the art-news editor, becoming that paper’s chief art critic in 1973. His writing was miraculously personal—his conservative politics were never far off in his writing—while still maintaining an intellectual respect for his subject, even in the midst of a scathing review.

Of a 1981 retrospective of Chuck Close at the Whitney Museum, Kramer wrote in the Times, “Far from bringing us closer to his subjects, this use of photography tends to sever our interest in them. For the photographs that are selected to serve as the painter’s pictorial donnees are programmatically banal. They are designed to discourage curiosity, and they mostly succeed in doing so.”

But he was also an artist’s ally. Of the painter Alex Katz, he once said, “One thinks of Monet at Giverny.”

“He would sort of insult you to your face, but, to me, there was a charm to it,” said Victor Navasky, the publisher emeritus at The Nation who worked with Kramer at the Times. He said that in the early ’70s, the paper formed committees to assess its future. Editors appointed staff from outside their sections to head their committees. Harrison Salisbury of the op-ed section chose Mr. Kramer and Mr. Navasky. Mr. Navasky recommended that the section create a role similar to the current public editor position, someone to address the paper with readers in the op-ed pages.

“Hilton’s response was, ‘That is the dumbest, stupidest idea I ever heard,’” Mr. Navasky said. “He said everybody attacks the New York Times and why do we need to waste space on the op-ed page doing the same thing that everyone else does? Hilton anchored his anger and fury in carefully chosen facts.”

He left the Times, according to Mr. Kimball at The New Criterion, because of the “limits of daily journalism.” (“You can write 800 words each day,” Mr. Kimball said, “but it’s difficult to write much more than that.”) For a time, he wrote a column for the New York Post called “Times Watch” that was critical of the Paper of Record. He believed their coverage of news and culture was becoming increasingly political. In 1982, he founded The New Criterion with Samuel Lippman, a pianist and music critic. Despite his belief about the politicization of the Times, the journal gave him a platform for his own conservativism. “In Alfred Kazin’s America,” Kramer wrote in a 2004 review of a Kazin anthology in the New Criterion, “any intellectual suspected of conservative sympathies was regarded with a contempt that bordered on paranoia, and the contempt was compounded into an intense loathing if the malefactor in question was a Jew.” Kramer also mentions that Kazin didn’t like him personally because of his New England accent. “For that reason,” Kramer writes, “[he] regarded me as insufficiently Jewish.”

While at The New Criterion, he also published a weekly front-page art column for The New York Observer. Kramer was brought on as an art columnist by The Observer‘s founder, Arthur L. Carter. Peter Kaplan, editor-in-chief of the paper for 15 years, said in an e-mail, “I was really proud to edit the only newspaper in America that had a piece of art criticism on the front page every week–it made me feel that we were doing our bit as the seawall against the general destruction of the culture–and I was particularly proud to be running Hilton. He was truly the defender of the faith.”

Asked if there were still critics like Kramer, Mr. Kimball responded with a quick “no.”

“It’s in the nature of excellence to be rare,” he said.