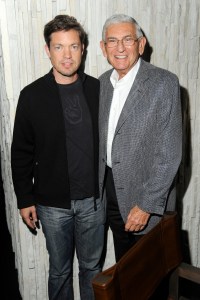 This weekend, the Los Angeles Times published a profile of art collector Nicolas Berggruen, who is known to some by the epithet “the homeless billionaire” because, the paper explains, “he prefers living out of five-star hotels to owning any homes.” Mr. Berggruen is also a voracious art buyer and has gone about collecting in a very specific way. Here’s the Times‘ Jori Finkel:

“For Berggruen has over the last year quietly spent tens of millions of dollars buying museum-quality works by 12 leading contemporary artists, which he says he intends to donate to [the Los Angeles County Museum of Art]—if some general conditions are met.”

As Ms. Finkel notes, with the exception of Nauman, who works in New Mexico, all of those artists are either German or Californian. They’re also all male, all white and five of them show at the Gagosian gallery. Mr. Berggruen is unconcerned about that uniformity, telling the Times: “They were picked one by one, not picked because they are old or young, have a beard or no beard.”

Though Mr. Berggruen emphasizes that he has “been doing this very cooperatively with LACMA, so the artists are artists that [LACMA director] Michael [Govan] likes and the works are ones he like,” Mr. Govan is a bit reluctant to take credit for the list. “Just to be clear,” he tells the paper, “this is not my list of artists, it’s Nicolas’ list. It’s very much his personal sensibility.”

The 12 artists are all superb, and as Mr. Berggruen no doubt recognizes, they’re secure investments: they’ve earned their pages in the art history books. But their work is also wildly expensive at this point in their careers (the youngest, Mr. Schütte, is 57). For the sums Mr. Berggruen is spending on admittedly important and impressive works, he could be buying whole tranches of art by a wide array of established, helping secure the position of younger, promising names (including women and non-white artists) that are on the cusp of lasting success. He could be filling LACMA with the art of our time.