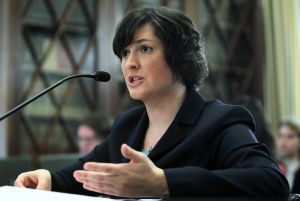 WASHINGTON, DC – FEBRUARY 23: Sandra Fluke, a third-year law student at Georgetown University, testifies during a hearing before the House Democratic Steering and Policy Committee February 23, 2012 on Capitol Hill in Washington, DC. Fluke was invited to testify at the hearing after she was blocked from testifying at last week’s House Oversight and Government Reform Committee’s contraceptives hearing. (Photo by Alex Wong/Getty Images)