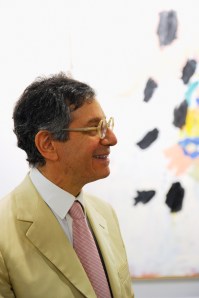 With former New York dealer Jeffrey Deitch approaching his two-year anniversary as director of the Museum of Contemporary Art in Los Angeles—he began on June 1, 2010—Mike Boehm checked in with him for an article in the Los Angeles Times, and he takes a close look at the institution’s financial status, which still has a ways to go before it can be considered stable and healthy.

First, the bottom line, courtesy Mr. Boehm: “MOCA had either a $504,000 surplus or a $302,000 deficit in its first year under Deitch, depending on whether one includes an $804,000 depreciation expense. That’s down from a $4.8-million surplus—depreciation included—in the year before he began as director.”

The museum’s endowment is still $18.4 million short of the figure the board has targeted, about $38 million, where it stood a decade ago, before administrators raided it to help pay for exhibitions and the worldwide economic crisis led to losses in investments.

For the current fiscal year, set to expire June 30, the museum expects to be “very close to a balanced budget,” according to chief financial officer Michael Harrison.

One of Mr. Deitch’s main concerns is no doubt finding a way for MoCA to continue to break even or run a surplus when Eli Broad’s $15 million pledge (announced at the end of 2008, as part of his efforts to save the financially strapped museum), which is being given in $3 million annual increments, expires after 2013. Right now, that is accounting for a quarter of the museum’s annual fundraising. Mr. Broad also offered to match $15 million worth of gifts to the endowment, and $8.75 million of that remains to be tapped, so that should help if other donors step up.

Meanwhile, Mr. Deitch chose to delay a landmark (sorry) Land Art exhibition by almost two months to host a cultural festival sponsored by Mercedes that should bring in “several thousand dollars” for the museum.

Greg Allen draws on our attention to the end of the article, which notes that artist Barbara Kruger is actually the lead funder of that Land Art exhibition, and is creating a work to be sold to help fund the $1 million show.

Update, 12:30 p.m.: An earlier version of this article incorrectly stated that the Times piece was by Jori Finkel, instead of Mike Boehm.