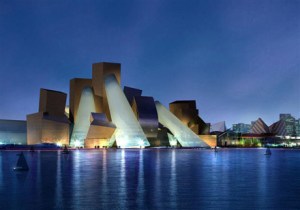 Proposed image of Guggenheim in UAE.

Human Rights Watch has put together a report of workers’ conditions on Saadiyat Island in the United Arab Emirates, the future home to numerous museum projects and the site of a New York University sister campus. The report, which was compiled from interviews with 47 workers, praises certain companies that have addressed mistreatment of workers, but also states that there are still “protection gaps.”

The takeaway here seems to be that despite many improvements, including the appointment of an independent monitor, “abuses are continuing.”

Julia Halperin over at Blouin Artinfo has combed through the 85-page report and written this detailed story.

Branches of the Louvre and the Guggenheim, as well as other cultural organizations, have been in development on Saadiyat Island in the hopes of turning it into a tourist destination. An estimated $22 billion has been spent by the U.A.E. government on these projects. Many of them have experienced long delays.