“We’ve come to celebrate his life and all that he has done,” said Rev. Dr. David Jefferson Sr., moments before Trustee Chama White of Bethlehem Baptist Church sang a soaring solo of the Lord’s Prayer.

U.S. Rep. John Lewis, President Bill Clinton, Gov. Chris Christie, the New Jersey Congressional delegation and many elected officials occupied one side of the South Ward church as a Payne family processional entered and bid their final farewells to the patriarch, remembered throughout the service as a congressman who put his local community ahead of himself and yet saw the world itself as his district.

Bill Payne, the congressman’s older brother, stood for an extended period of time over the open casket of his brother, his partner in politics their entire lives. He kissed him on the head.

The congressman’s son, Donald Payne Jr., stood with his wife and three children and paid their respects.

Then the younger Payne returned alone to his father and helped secure the casket draped by the American flag.

Many lined up to pay tribute to New Jersey’s first African-American Congressman.

U.S. Rep. James Clyburn (D-SC) said members of Congress typically refer to one another as “my friend,” when they don’t really mean it. Clyburn said he believed there was not a member of Congress who couldn’t sincerely call Payne a friend.

Speaking first, Newark native Christie presented a quote from Payne, which included the following line: “I want to serve as a role model for the young people I talk to on the Newark street corners.”

“He did,” said the governor. “He did every day of his life. He did when he was thundering for justice on the floor of the U.S. House of Representatives. He did in quiet moments. He did, when he stood up for what was right every day. He did when he tried to make the dreams of others a reality.

The combative Christie acknowledged that his own style differs from that of the zen-like Payne.

“Congressman Payne and I complemented each other,” the governor said to laughs and applause.

“That combination is one that is rare in any human being, but particularly rare in people in public life,” said the governor. “Congressman Payne changed the world.”

Attorney General Eric Holder appeared on behalf of President Barack Obama. Holder called Payne an extraordinary leader and mentor and read from a letter Obama directed to the Payne family.

“Michelle and I are deeply saddened,” the President wrote. “Donald will be remembered for a trailblazing career.” Obama noted the congressman’s work on behalf of the poor and his human rights advocacy worldwide.

In 1998, Payne prevailed on then-President Bill Clinton to travel to Africa, and he was proud of spending a number of days on Air Force One.

Clinton received an impassioned welcome in the form of a sustained standing ovation.

The former president would stay for the entire, all-day service.

“Thank you for letting the rest of us be a part of this,” Clinton told the Payne family.

He focused on Bill Payne for a moment.

“You were a good brother,” Clinton said. “On occasion Donald did this selfless deal. So Bill would have to go along behind him and remind everyone that he was in politics and had certain essential needs.”

Clinton said Congressman Payne made him a better president.

He related two stories, one about Northern Ireland and one about Uganda.

“All the Irish cared about it (peace in the region) – and Donald Payne,” said the president.

In Uganda, “we’re walking into this village and we saw the fruits of a modest amount of your tax dollars providing micro-credit business loans to the village. The loans averaged $50 each. He asked me, ‘How many of these are we giving out?’ I said, ‘$2 million,’ and he said, ‘That’s not enough, is it?’ He came home and did something about it. He was always doing something about it. He saw a personal story and it became a personal story.

“I loved him,” the president added. “He was a good and faithful servant.”

“He was Newark,” said Newark Mayor Cory Booker. “If you cut the man, he would bleed bricks. Everyone saw in him the roots of our highest aspirations. …He could fly on Air Force One, but never lost the common touch.” Cleaver had earlier referred to the placid Payne “going Newark” on at least one occasion, and Booker gently pointed out that thanks to Payne, Newark represents peace and gentility to people in African countries touched by his presence.

“Some of our elected officials become so big that they become useless to the people they serve,” Sharpton said. “Some go to Trenton like we elected them for their careers instead of careers for the rest of us. Donald Payne never forgot why he went to Washington. He realized where home was, which is why he was loved. All the way to the very end, he had something rare. He had integrity. We never worried when Donald Payne went in the room. We were never concerned he would get weak or sell out. He could be gentle and quiet because he knew who he was. He didn’t have to compensate for his insecurity by being bodacious.”

“I would hope we would commit ourselves to that today,” the reverend added.

Lisa Jackson, administrator of the Environmental Protection Agency, said she recalled first going to Washington, D.C. to serve in the Obama administration. She remembered the looks of friends in the tough town – looks that said “you can do this.”

“Donald Payne’s look was a little bit different,” said Jackson. “The look was, ‘You can do it, but you must do it.’ Mr. Payne, in saying goodbye, I promise not only to do the work but to give that look to those behind. Thank you, sir.”

Cleaver related a story from three weeks ago.

“He didn’t,” said Cleaver. “He voted. And after the votes were over, he left. I tell you that because it is important to know that Donald Payne lived until he died. The worst thing you can do is die, while you’re still alive.”

“It was because of C
ongressman Payne’s support that I’m standing here today as the county executive,” said DiVincenzo.

Essex County Democratic Committee Chair Phil Thigpen said of his longtime ally, “We have lost a friend, a supporter and a mentor and a person who did not look for credit, he looked for results.”

Speaker Sheila Oliver (D-34) grew up on the same South Ward block as the congressman, where Payne served as block association president and inspired her with his public service and leadership.

“The annals of New Jersey history will record him as a great congressman, a great father, a grandfather, a brother, an uncle and a friend,” said the speaker. “The outpouring of love that has been demonstrated to the Payne family is a testimony to the life that he lived. He chose the intimate sphere of family and community and the private sphere of the intellectual mind.”

In tribute, Oliver read the Emily Dickinson poem, “Because I could not stop for death.”

Civil rights icon Lewis didn’t ask to speak. The family asked him, and he thanked them.

“He was such a gentleman who walked with dignity, pride and grace,” Lewis said. “But he was so unassuming… his only motive was to defend the people of his district. He was a beautiful brother. He was a quiet visionary.”

The two congressmen toured Newark together in December.

“The last words he spoke were not of his health,” Lewis said, looking back on the meeting. “They were of the people of his district. He said, ‘John, there is so much that I want to do.’ He was saying, in effect, he was not finished. And he was right.”

Pastor Toney E. Jackson of Bethlehem Baptist Church, the congressman’s  pastor, rose and brought the service to its conclusion.

“Congressman Donald Payne is now at peace with God,” he said. “Take the torch and run with it, and keep it burning.” 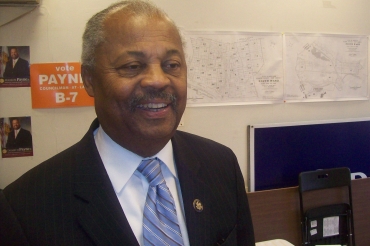