After 13 years working in finance, downtown Jersey City Councilman Steve Fulop is leaving his job to focus full time on the 2013 mayoral contest.

“Today, in fact, is my last day working in New York,” Fulop told supporters in an email.

“I want to spend the next 14 months talking full time about how Jersey City can become an even better place to live and work,” added the challenger. “The mayoral election is in May 2013 and I know history is littered with well intentioned campaigns that started too late and that were ultimately crushed by the Jersey City political machine. I don’t intend on letting that happen. We are in a very good position, but I know that we face a deeply entrenched political machine.”

“I am sure we agree that life presents us with both risks and opportunities, and that there are moments that simply have to be seized. That’s why I’m taking the scary and important step of going all-in on this campaign,” said Fulop, a Marine Corps Iraq War veteran and political ally of the late Mayor Glenn Cunningham, husband of the senator.

“Commitment is important, and this change in my personal circumstances is part of a commitment to put forth the best mayoral campaign possible, touching the most people. Whether it be at schools, senior centers, bus stops, parks, or PATH stations, I will probably see you in the near future as my goal is to walk every last block in Jersey City starting Monday,” said Fulop. “I’ll be out there. And when you see me, please don’t hesitate to let me know what you think we can be doing to make the city better. My hope is that you will be a part of this in some way, whether you are contributing ideas, financial support, or your time.” 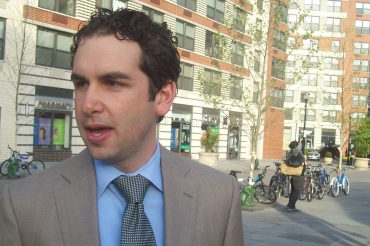