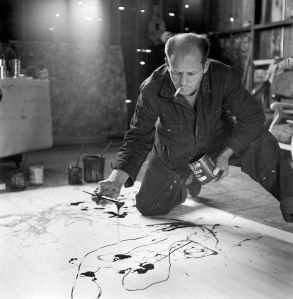 It is an unfortunate fact that when I get scared, I cry. Until I decided to go to the Museum of Modern Art, scare myself silly, and then look at One: Number 31, 1950 by Jackson Pollock, however, this was not something that affected my journalistic endeavors.

This self-inflicted terror was all in the name of science. My aim was to test out the theories of New York-based researchers Kendall J. Eskine, Natalie A. Kacinik and Jesse J. Prinz, who recently published an article in the journal Emotion titled “Stirring Images: Fear, Not Happiness or Arousal, Makes Art More Sublime.”

Their thesis is that when in the throes of a recent scare, one appreciates abstract art more. Specifically, one appreciates in abstraction those sublime qualities outlined by 18th-century philosopher Edmund Burke—the rough, the obscure, the terrifying, the powerful, the painful—and not those more sedate aspects of the “beautiful.” For as Burke writes in his 1757 A Philosophical Enquiry Into the Origin of Our Ideas of the Sublime and Beautiful, “Whatever is qualified to cause terror is a foundation capable of the sublime.”

In their article, Eskine, Kacinik and Prinz state that “recent evidence from neuroscience suggests that emotions play a critical role in art perception,” but that no one had yet looked into which emotional states positively influence aesthetic experiences. To this end, the research team enlisted 85 Brooklyn College students and instructed them (for course credit) to sit normally, do 15 or 30 jumping jacks, or watch a happy or scary video, before viewing the work of Russian artist El Lissitzky.

“Only the fear condition resulted in significantly more positive judgments about the art,” the researchers conclude. At least, I thought as I strolled into MoMA to test this deduction, I won’t have to disgrace myself by doing jumping jacks in front of a magnum opus of modernism. That was back when I still believed I would have the fortitude not to bawl in front of tourists.

Having ditched El Lissitzky, I prepared to alarm myself in the company of Pollock’s vast “drip” masterwork, with its mesmerizing web of enamel paint, which (as anyone who loves a good biopic knows) the artist tossed, flung, splattered, poured, and flicked from above, as he stalked around a canvas laid out on the floor.

Since everyone in a museum now has an iPhone out, snapping photos for their no-doubt comprehensive archives of blurry art-pics, I didn’t look too suspicious as I took up my post with iPhone in hand, Googled “scariest video,” and popped in my headphones.

ParanormalKnowledge.com provided the “top 10 scariest videos on the Internet,” with the tamely titled “Ghost Car” listed first. I hit play, and here’s what I saw: An aerial view of a midsize sedan as it cruises along a winding road. Mellow elevator music plays. Then, A ZOMBIE/DEMON/GHOST POPS OUT AND STARTS SCREAMING.

I let out a strangled yelp and jumped, nearly knocking over a Giacometti, and scaring everyone within a 40-foot radius. (They’ll thank me later when their state of panic enhances their viewing experience, I consoled myself, as the tears began streaming down my cheeks.)

Once I’d mopped my face and my glasses and could kind of see again, I considered the sublimity of what hung before me. My heart was beating at what felt like five times its normal rate; I was hyperaware. My consciousness was working in such frenetic overdrive that the loops of paint suddenly seemed to be vibrating. As the researchers promised in their paper, “Fear seizes one’s attention, halts current plans, and increases vigilance.” (Fact: I almost dropkicked a creepy, pale kid who bumped into me.)

It turns out that when you expect things (killer ghost-zombies) to pop out at you, they (lines of paint) do. Pollock’s calligraphic marks, which on a stress-free day seem calmly to come forward, recede, cohere and then fall apart as you look at them, became considerably more animated. And the claim of unity inherent in the painting’s title, “One,” became even more paradoxical. As I, the startled viewer, attempted to take in the entirety of the work, my heightened attention was whipped from detail to detail.

Without preparatory sketches, Pollock’s “drip” paintings are a record of how man can wrestle with chaos, both letting the paint fall as it will from the stick, turkey-baster, hardened brush or can, and acting as intermediary, controlling the sweep of the action. It’s automatism and Surrealist chance reined in by brute force. Pondering this led me further. This is a Ouija-board style of painting, I decided, where the irrepressible, the otherworldly, is channeled through the hand of man. Could it be that Jackson Pollock was haunting the museum through his artwork?

Pollock’s art is about physical presence, about feeling the body in the room, about feeling the weight of the boot that left its imprint on the canvas. “On the floor I am more at ease,” the painter said of his practice of working from above. “I feel nearer, more a part of the painting since this way I can walk around it, work from the four sides and literally be in the painting.” He is literally in the painting, I convinced myself, as I tensely waited for an Ed Harris-like disembodied face to float toward me.

Let’s not forget, my terror-stricken mind churned on, the line from the late MoMA curator Frank O’Hara’s 1956 poem “A Step Away from Them”: “Bunny died, then John Latouche, / then Jackson Pollock. But is the / earth as full as life was full, of them?” Sounds like the earth is full of their ghosts! I hightailed it out of the museum, visions of what kind of ghoul might burst, screaming, from Harold Rosenberg’s “apocalyptic wallpaper” freaking me out me as I fled.